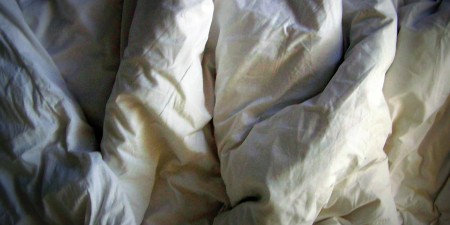 What if you have a child who is well-mannered, makes straight A’s at school, and is successfully involved in all sorts of extracurricular activities, but one day, that child comes home and begins cursing like sailor and curses at you in the process? I wonder, how would you respond? Would you think to yourself that since he is successful in many things, generally well-mannered, and a fantastic student, there is nothing to worry about? Would you reason that this is just one problematic thing, and he will probably grow out of it? You almost assuredly would not respond that way. Most would immediately drop everything to respond because of a right desire to put a stop to that kind of seriously disrespectful behavior.

Imagine another scene with the same child who possesses all of the same wonderful characteristics. However, instead of cursing like a sailor, you have trouble getting him out of the bed in the morning. He consistently sleeps in, even into the afternoon if you even fight the battle to make him get up. You have trouble getting him to go to bed as well. Whenever you give him a job, he is easily distracted, has difficulty getting started, and rarely adequately finishes a work task. How would you respond? Would you think to yourself that it’s no big deal? After all, look at how he is excelling in so many things. Would you laugh about it thinking that that’s just the way kids and teens are? Surely, he will grow out of it.

Now, this is certainly no defense of cursing one’s parents, but the Bible spends more time addressing the rebellion of laziness. Cursing your parents is rebellion but so is laziness. The testimony of the Bible from beginning to end says that laziness is wicked. But we don’t often look at it that way. Why is that? Why don’t we think laziness is a big deal? Why has laziness become a respectable sin among Christians?

Laziness as a Worldview

For many, laziness is a lifestyle—a worldview. We teach ourselves to think that everyone should want nothing to do if they can make it happen. We romanticize laziness. Our lives reflect a song from the 80’s, “…everybody’s working for the weekend…” We tend to think that if we didn’t have all this work to do (meaningless secular work), then we could be really vibrant Christians. We could spend all of our time reading the Bible, and then we could be powerful and bold believers. This way of thinking is laziness as a worldview. We have come to believe that the reason we work is so that we can rest. Work in this way of thinking is a necessary evil, and that is too often the story we tell ourselves. But thinking in this way turns God’s work and rest rhythm completely on its head. Biblically, we do not work so that we can rest; we rest so that we can work. When we do not get this foundational reality right, we draw wrong conclusions about both work and rest.

When God created the world, he called his creation “good,” and after he created human beings in his image, he declared it was “very good” (Gen 1:31). At the end of Genesis 1, God asserts the unique purpose and mission of his image bearers: they are to take dominion (rule the world under God’s authority). From the very beginning, we were meant to look at the world and see purposeful work. His image bearers were to be committed to human flourishing under the glory of God. When God finished his creative work, he rested (Gen 2:1-3). Why did God rest? God was not weary. God’s rest was a celebration of God’s work; he was delighting in the goodness of his creative work. God is still at work in a fallen world through the church. God commands us to rest on the Lord’s Day so that we can celebrate his work in the world and our work in his kingdom that brings him glory. We celebrate and rest in the work of God in Christ and commit our lives to gospel rest on the Lord’s Day so that we can rightly do gospel work. We must get the order right—rest to work.

Prior to the fall into sin, God put a garden in his created kingdom of Eden for man to work in order to provide for image bearers and to promote communal good (Gen 2:8-15). Biblically, work is not a necessary evil; it is the good gift of a sovereign God. To think that work is a necessary evil is rebellion against God’s design. Both work and rest are vital. The one truly committed to faithful work will be disciplined about rest so that he or she will be able to work effectively. Work is uniquely tethered to purposeful living and is externally focused. Work is about doing something to make your family, your community, and your world better. Work is a commitment to human flourishing (whether the work is for pay or voluntary). The lazy image bearer is living in rebellion to his or her Creator.

The Folly of Laziness

With this perspective in mind, it is no wonder that when we get to the wisdom book of Proverbs, a significant portion of the book is focused on work. Specifically, in Proverbs 6:6-11 alone, we find four characteristics of a lazy person.

In Proverbs 6:6-7, sluggards are told to consider the ant. The ant has no chief, no master, no one prodding, and yet works diligently (this is an illustration from observation). Is that true of you? Is it true of your children? Do you have an internal God-centered motivation for getting things done or do you need external motivation? Here is one easy test. When your alarm clock goes off in the morning, do you get up or do you hit the snooze button? Once? Twice? Five times? Those five to fifteen minutes do nothing to help you for the day. So why do you do it? Could it be that you are reinforcing a habit of laziness with every press of the snooze button? When given a job, do you dwell on obstacles and allow them to keep you from getting started? Parents, what good could possible come from training your children that sleeping in as long as they can every day is a good thing?

Proverbs 6:8, observing the work of the ant, affirms the priority of consistent work with a view toward the future and others. What is the opposite of the ant? Waiting until there is an urgent need before you begin work. You know you struggle with laziness if you’re a student and you wait until the night before a paper is due to begin writing. You may write a great paper, but you are still lazy. The same is true for the employee or stay-at-home mom. The lazy person is always held captive to the tyranny of the urgent. When you live like that you become miserable and a miserable person to be around. Cramming all of your work into a few hours is not a path to joy. Some people are so busy because they are too lazy to organize and prioritize their lives. Parents often model this kind of work misery to their children by complaining and grousing about their work and then ironically wonder why their child has a poor work ethic.

In Proverbs 6:9-10, we see the sluggard making excuses: “A little sleep, a little slumber, a little folding of the hands to rest.” Have you ever noticed that no one considers themselves a lazy person? As a seminary professor, I have never had a student turn in a late paper and state the reason was because they were lazy. We tell ourselves a story to excuse our laziness. After all, we were just a little late, and we just had a little problem. No one admits to laziness. Why? Because we create a narrative about why we failed to be diligent. Proverbs 22:13 says “The sluggard says, ‘There is a lion outside! I shall be killed in the streets!’” which was an outlandish excuse (much like, “The dog ate my homework.”). Why does it say “sluggard” instead of “coward”? Because laziness and cowardice are complementary traits. They go together. The lazy person is self-centered and so there is no motivation for courage—only cowardly excuses.

In Proverbs 6:11, we see that poverty overtakes the lazy person and sneaks up on them to do them harm. Have you ever met anyone who says that they are choosing to not work hard because their goal is to live in poverty? No. But when you live based on a worldview that is directly counter to what God has said you are harming yourself even if you do not see it: “The soul of the sluggard craves and gets nothing” (Prov 13:4). Do you see the irony of this? Laziness is seen as a pursuit of satisfaction and contentment, but it will only lead to dissatisfaction and discontentment. Why? Because laziness is rooted in self-centeredness, and therefore, it is childishly short-sighted. If you feed self-centeredness and cultivate short-sightedness, there is no pathway to contentment.

For the believer there is no such thing as secular work. Every task is to be sacred for the one who is united by faith to Christ and filled with the Holy Spirit. Housework, building, teaching, and preaching all have the same responsibility to be done for human flourishing to the glory of God. The apex of the original dominion mandate is the work of the church in fulfilling the Great Commission (Matt 28:16-20). Therefore, all work for the Christian is tethered to pointing others to Christ. The Christian ought to be the hardest, most diligent worker. The Bible calls laziness wicked. To be wise we must call laziness wicked as well. To do so we must reframe our thinking about work in light of the gospel. Laziness is not only rebellion against the Creator; it is also rebellion against the Redeemer.
May we “work heartily, as for the Lord, not for men” (Col 2:23) and “redeem the time” (Eph 5:16, Col 4:5), teaching our children to do the same. Start simple, do not hit the snooze button in the morning and thank God for the gift of work—then get to work.