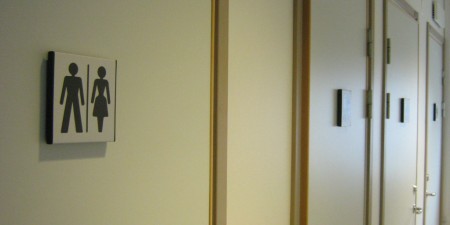 Writing a response to a response is rarely a good idea, but I’m going to do it anyway in this piece. Russell Moore, president of the Ethics and Religious Liberty Commission, wrote a piece entitled, “The real meaning of transgender bathrooms.” In the piece Moore explains,

We should recognize what’s really happening here, and it’s much bigger than the symbol of the bathrooms. The Department of Education’s actions here mean that “gender” itself in terms of admission for all colleges accepting federal funds is ultimately a matter of identification, not biological sex.

The state here wishes to use its coercive power not simply to stop mistreatment of people but to rescript the most basic human intuitions about humanity as male and female. How, after all, does one win a culture war against one of the most basic facts of science and life: that there are two sexes? One does so by withholding the funds and recognition necessary to operate in public space, unless institutions get in line. Children, then, become pawns of the state for the state to teach what is ultimately a theological lesson, not a scientific one (link).

Moore’s piece led to a response from Jonathan Merritt, a columnist for Religious News Service and author of several books, including Jesus is Better than You Imagined. Merritt contends that Moore’s response provides us, “Three reasons conservative Christians will lose the transgender debate” (link). His three reasons are: (1) They focus on ideology while ignoring people, (2) They prooftext from scripture while ignoring science, and (3) They rely on fear while ignoring facts. At the end of the article, Merritt admonishes, “In the early 2000s I began predicting that the battle over gay marriage was already over,” and he adds that “conservative Christians seem hellbent on perpetually making the same mistakes ad infinitum.”

Does Merritt believe that opposing the redefinition of marriage was a mistake? Is he likewise contending that Christians who oppose children being forced to use the same restroom with the opposite sex are making a mistake as well? It is clear from his writings that he consistently praises those who reject evangelical sexual morality and celebrates those who embrace the cultural and governmental enshrinement of the sexual revolution. Merritt’s writings suggest that he believes being on the right side of the cultural moment settles the matter, at least in regard to sexual morality and gender identity.

Merritt takes Moore, and other conservative Christians, to task for focusing on ideology while ignoring people. But the truth is that Moore was addressing the issue through the lens of biblical theology because of his concern for people. He believes, as I do, that President Obama’s coercive mandate will be harmful to human flourishing. In other words, Russell Moore, as a Christian theologian and ethicist, was seeking to love God and neighbor. Merritt writes, “Those who have a more progressive view of transgender issues use concrete language and share specific stories. They talk about real transgender people with real struggles who experience real oppression.” Merritt frames himself as people-focused and as one who is on the right side of this unique cultural moment. But what Merritt offers is not cutting edge, but rather the warmed over arguments of Protestant liberalism. Liberalism in every age accepts a utilitarian view of the truth that accommodates Christianity to the prevailing spirit of the age. J. Gresham Machen wrote, “At the very root of the modern liberal movement is the loss of the consciousness of sin” (Christianity and Liberalism, 54). Does Merritt believe homosexuality is a sin? Does he believe that it is a sin to self-identify and live as the opposite of one’s biological sex? Clarity on these questions would be expected in a piece as strident as his.

Machen also adds, “My Christian life, then, depends altogether upon the truth of the New Testament record. Christian experience is rightly used when it confirms the documentary evidence. But it can never possibly provide a substitute for the documentary evidence” (Christianity and Liberalism, 72). Merritt’s argument makes a golden calf out of people’s narratives. While personal narratives are important, narratives only find meaning when embedded within larger horizons. The question Merritt’s critique does not answer is: Whose horizon? The horizon of an ever-expanding lexicon of the sexual revolution, or the horizon of Scripture? The biblical witness authoritatively judges the validity of our Christian experience and never the other way around. This is true of our sexual feelings and experiences and every other matter as well. Merritt calls for conservative Christians to do the very thing they must not do if they wish to remain conservative Christians—put themselves in the place of God.

Merritt admonishes Moore because of Moore’s stance that “the Obama letter violates ‘one of the most basic facts of science and life: that there are two sexes.” Merritt critiques, “He then moves swiftly away from science to Bible verses like Genesis 1:27 to argue, ‘God created us as human, and within humanity as male and female.’ This attempts to give readers the impression that Moore’s views have a scientific basis when they do not.” Merritt is free to refute the idea that human beings are born with a binary biological sex, and we are free to point out he is at odds with reality. Does Merritt believe or disbelieve Genesis 1:27: “So God created man in his own image, in the image of God he created him; male and female he created them”?

Merritt then mentions the reality of intersex persons (persons born without distinguishable male and female reproductive organs) to contend that Moore and other conservative Christians refuse to deal with biological science. He introduces the anomaly of intersex persons as if the variation from the norm disproves the the norm. Rather, the category of intersex persons exists to identify the extremely rare exceptions to the norm that human beings are born biologically male and female. The transgender individual is expressing psychological (not physical) alienation from their biological sex, which doesn’t change the gender binary. Moore was not discussing intersex persons in his piece, but rather he was discussing the Obama administration’s edict that public schools begin allowing bathroom access on the basis of self-identification. Merritt confuses the issue by attempting to conflate intersex individuals with transgender-identifying persons. He appeals to a biological anomaly while ignoring the biological norm and the Scriptural testimony in an attempt to refute the position of conservative Christians. His argument is unconvincing.

Merritt contends that Moore, and other conservative Christians, rely on fear and ignore facts. He explains, “Conservative Christians often rely on bombast to create a feeling of panic and urgency on culture war issues.” It is doubtful conservative Christians have cornered the market on bombast. Merritt’s own piece dismisses the entire history of evangelical teaching on marriage and sexual identity in a few paragraphs with the self-righteous tone that any reasonable human being would agree with him and those he quotes. Of course, while he pronounces the certain defeat of conservative Christians in the transgender debate, he does so with an absence of biblical argumentation. Talk about bombast! His argument proceeds as if experiences and science are authoritatively norming—but Scripture is not. Conservative Evangelicals proceed believing that the fear of the Lord, as revealed in his word, is our starting point: “The fear of the Lord is the beginning of wisdom, and the knowledge of the Holy One is insight” (Prov 9:10).

Merritt reasons as if being on the right side of this cultural moment provides a justification for the truthfulness of a position. Those of us committed to the absolute authority of Scripture fail to find that line of argument convincing. Scripture consistently portrays the people of God as residing on the cultural margins, out of step with the cultural moment and the governmental powers of the day. Believers are to respond to cultural marginalization by loving God and neighbor, seeking the welfare of the city, and seeking to be salt and light to the larger culture. Doing so means that capitulation to the wisdom of the world is not an option.

Merritt’s critique would rule any distinctively biblical approach to the transgender issue which proceeds on the basis of the the absolute authority of Scripture as out of bounds. The Bible reveals that being on the ultimate winning side of any issue means aligning our thoughts and lives to God and his gospel as he has revealed in his word. After all, “The grass withers, the flower fades, but the word of our God will stand forever” (Isaiah 40:8). Affirming the reality of binary male and female sexual distinctions is not a matter of prooftexting, but rather acknowledging the warp and woof of the whole of Scripture and the gospel to which male/female marriage sexuality points. In the end, the ultimate end, that is the winning side—the right side of the Bible and eternity.