The Political Courage and Example of Jackie Robinson 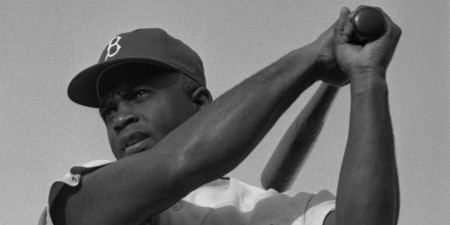 Jackie Robinson was known as a fierce and courageous competitor on the baseball diamond. That day in 1947, when Jackie Robinson, a 28-year-old Major League Baseball rookie, ran onto Ebbets Field, he transformed one of the most sacred spaces in American culture. Branch Rickey, the General Manager of the Brooklyn Dodgers who signed Robinson, said,  “I don’t think any other man could have done what he did those first two or three years.” Robinson’s willingness to endure humiliation, shame and persecution for the greater good of pursuing racial equality is a story of Christian conviction and awe-inspiring moral courage.

Less well known is the fact that Jackie Robinson’s fierceness and courage extended to the political realm as well. No matter how often liberal history revisionists deny the fact, Jackie Robinson was a lifelong political conservative, and often supported Republicans. Robinson was a Christian social conservative. Some have attempted to paint Robinson as a naive, politically unsophisticated supporter of the GOP. Such an assessment is as insulting as it is inaccurate. Robinson’s own assessment of his political engagement was, “I think I’ve been much more aggressive since I left baseball” (Michael G. Long, First Class Citizenship: The Civil Rights Letters of Jackie Robinson, ix). “He was militantly for the rights of black people within a Republican framework,” explains Harvard historian, Leah Wright Rigueur (Source).

The truth is that Robinson was a hopeful, long-suffering, painfully honest, and frequently frustrated Republican (like most). In other words, he was the best kind of conservative, one who would not be co-opted by any political faction, and who uncompromisingly held everyone’s feet to the fire to do the right thing. No student of Robinson’s life could ever honestly conclude that he was politically naive or unsophisticated. He was fiercely committed to whatever he believed to be the right thing and was not intimidated in the least by political position and power. He was a man who, when forced to choose, chose principle over party. Robinson explained in his autobiography, his approach to life, “A life is not important except in the impact it has on other lives” (Jackie Robinson, I Never Had It Made, 277).

Robinson supported Eisenhower for president in the 1950’s and then campaigned vigorously for vice-president Richard Nixon in his 1960 presidential campaign. Nevertheless, he vehemently criticized both men when he felt they were too slow or unwilling to advance a civil rights agenda. Robinson made appearances and stump speeches for Nixon throughout the country. Robinson would also work on behalf of Nelson Rockefeller’s failed GOP presidential bids in ‘64 and ‘68. He believed that a two-party political structure demanded racially integrated parties and his generally conservative outlook usually placed him with the GOP. He believed in a strong military and though he loved and supported Martin Luther King Jr., he criticized King’s anti-war rhetoric. He was also a fervent anti-communist, who described the nation as “engaged in a titanic struggle with a resourceful and powerful enemy” (Arnold Rampersad, Jackie Robinson, 324).

While primarily identifying with the party of Lincoln, Robinson was no political puppet or shill. When Eisenhower called for patience on civil rights because people needed to change their hearts, Robinson wrote, “When a man has his foot on your throat, you can worry later on about changing his heart…. If the president would merely review the record, he would discover that Negroes have been patient for nigh on to 96 years, since Abraham Lincoln signed the Emancipation Proclamation” (Michael Long, Beyond Home Plate, 130). After Nixon embraced a Southern election strategy in 1968 that coddled racist whites, Robinson wrote, “It was a white folks’ affair and the once Grand Old Party’s new caretakers, under Richard Nixon, leaned over backwards to give Dixie some Southern Comfort…. They deserve the man they got–a double-talker, a two-time loser, an adjustable man with a convertible conscience–Richard Nixon” (Long, Beyond Home Plate, 151-152).

Robinson denounced Barry Goldwater’s ‘64 GOP nomination because of his willingness to court the votes of racists, and he worked tirelessly on behalf of Black Republicans for Lyndon Johnson, and then later for Hubert Humphrey. Goldwater sought to meet with Robinson, after Jackie publicly called him a “bigot.” Robinson responded, “What are you going to tell me, Senator Goldwater, which you cannot or choose not to tell the country?” (Long, First Class Citizenship, 201). Robinson’s position was politically shrewd, if Goldwater wanted to clarify his suspect record on civil rights, he should do so publicly and not with winks and nods behind closed doors. He had no intention of being duped into offering Goldwater political cover.

Robinson’s tireless work on behalf of civil rights as a Republican left him open to charges of being a sellout to his race. Malcolm X wrote to Robinson accusing him of serving his “White Bosses.”  Malcolm X continued, “You have never shown appreciation for the support by the Negro masses, but you have a record of being very faithful to your White benefactors… if the whites do murder you, you are still gullible enough to die thinking they are still your white friends.” Robinson responded with characteristic fire, writing that he would “cherish” the letter because, “Coming from you, an attack is a tribute.” He continued, “Personally, I reject your racist views. I reject your dream of a separate state…. you, Malcolm, hate white people…. I do not do things to please ‘white bosses’ or ‘black agitators’ unless they are the things which please me.” Robinson concluded, your leadership is “sick,” and “I hate to think of where we would be if we followed your leadership” (Long, First Class Citizenship, 182, 186, 188).

As a new baseball season begins in the midst of a bizarre presidential election, I think we would do well to remember the fierce courage of Jackie Robinson, on and off the baseball field. Robinson stole home 19 times in an abbreviated Major League Baseball career, and he was even bolder as a citizen than he was on the basepaths. Despite his personal accomplishments, Robinson said, “I won’t have it ‘made’ until the most underprivileged Negro in Mississippi can live in equal dignity with anyone else in America” (Long, Beyond Home Plate, vii). I think if Jackie Robinson were alive today he would be quick to point out the advances that have been made on issues he cared deeply about, but I also think he would be loud to denounce the ongoing racial demagoguery and polarization in American politics. But he would not simply complain, he would get to work, because his life showed he did not need the perfect candidate, he simply needed one he thought right on the most important things.

Jackie Robinson loved his country enough to point out its faults and personally work for its good within our two-party political system. He was honest and sober about the nation’s problems, but he possessed an enduring hopefulness despite all he had been through. In 1972, Robinson attended a fundraising event again for Nixon who he felt had betrayed him in the past. In our age of simplistic, hyper-polarized politics, that amounts to little more than choosing sides and vilifying opponents, Robinson’s stubborn refusal to be politically stereotyped or co-opted is a powerful example to us. He possessed a prophetic voice, informed by his Christian faith, and he was willing to praise those who did right, no matter their political party, and to speak against those who did wrong no matter their party. He was rightly most disgusted by selfish political opportunists. May we remember Jackie Robinson not only as a fierce and courageous baseball hero, but also as a fierce and courageous citizen, and may we emulate him, because we don’t have it made either.