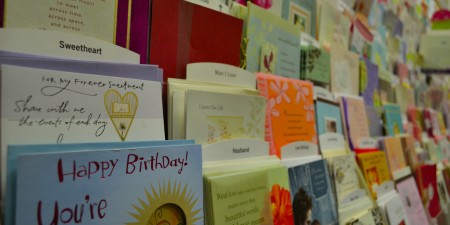 I do not generally like Hallmark cards. When I get my wife, children, or someone else a card, I usually look for one that is attractive on the outside but blank on the inside. I prefer to write my thoughts inside the card because I never read what is written in Hallmark cards and think that it sounds like something I want to communicate. Usually, when I read Hallmark cards, I find it to be cheesy sentimentalism, devoid of any authenticity or depth. The slogans seem insulting to me. They often represent a smiley-faced, cotton-candy view of the world that ignores reality.

I recently read comments in a dialogue about race, American culture, and Christianity, where the comment was made, “I don’t see color.” When I hear a comment like that, I consider it Hallmark card theology and cultural analysis. It is hyper-simplistic—an easy assertion—which totally ignores the realities and complexities of the issue. I bet I do not even have to tell you that the comments I mentioned were made by a middle-aged white guy. I am confident that if the same person who made those comments was in a cultural situation where he lived as an ethnic minority among a group that had historically faced systemic racial injustice, he would see color.

But, I can assure you that he already sees color, and so does everyone else and rightly so. Martin Luther King Jr.’s comments about a colorblind society have been corrupted by many to mean that individuals should not see color, which was not his point at all. His point was that as a society, the bar of justice and cultural opportunity ought to be colorblind, not individuals. In fact, the Bible makes much of how the glory of God is demonstrated in the multiethnic diversity of his followers. When the Scripture declares that John the Revelator saw, “a great multitude that no one could number, from every nation, from all tribes and peoples and languages, standing before the throne and before the Lamb” (Rev 7:9), it is a call to see color and celebrate multiethnic gospel diversity. The Bible gives us an ethic of celebration, not merely toleration, regarding ethnic diversity.

The person who says, “I do not see color,” is usually doing so to cut off genuine dialogue and ignore the legitimate difficulties of the issue. The “I do not see color” cliché is simply not true. It is empty sentimentality that seeks to avoid authenticity and thoughtfulness related to addressing cultural issues regarding race and ethnicity. It is a dismissive, smiley-faced, cotton-candy theology of humanity that ignores the realities of a sinful world and our sinful hearts. The congregation I pastor has many families that are transracial, and I can assure you that, though they love one another equally, they cannot (and should not) ignore their racial and ethnic identity. As a father in our congregation has black and white sons told me, “It is just a fact, my boys are treated differently because of the color of their skin, I see it all of the time. That reality means I am forced to have conversations with all of my children that most families do not have to have.”

Whoever is reading this; I can assure you that you are not the one person who has risen above seeing the color of someone’s skin. And if you were, it would not be a rising above, but rather a reductionistic falling below, a failure to delight in the diverse expanse of God’s glory among his image bearers. Until Jesus returns and consummates his Kingdom, in a New Heavens and New Earth, we will struggle to “take every thought captive” (2 Cor 10:5) regarding race and ethnicity to obey Jesus Christ. The professing Christian, who treats certain races or ethnicities as though they are lesser because of the color of their skin is failing to take their thoughts about race and ethnicity captive to obey Jesus Christ. But the main point of this post is to say that the person who says, “I do not see color,” is failing to take their thoughts captive about race and ethnicity to obey Christ as well.

Racial supremacy and professed absolute racial colorblindness both stand in opposition to what the Scripture describes as the glory of the work of Christ in the gospel. Gospel-centrality does not cause us to ignore the concrete realities of a person’s life, background, personality, struggles, and ethnicity; but rather, it leads us to see those facts as unique displays of the gracious providence and glory of God that bind us all together as brothers and sisters in Christ–“the household of God” (Eph 2:19). Racial supremacy and professed absolute colorblindness are dehumanizing and fail to comport with Jesus’ foundational command to love God and neighbor (Luke 10:27).