The Preaching of the Risen Christ: The Apostles and Us 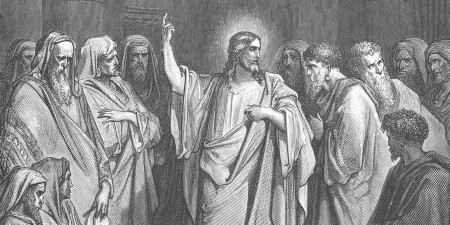 Apostolic preaching is the application of what Jesus taught his apostles about preaching. Willem VanGemeren writes, “First, the sermons and speeches show that the preaching of the apostles is in continuity with the teaching of Jesus” (The Progress of Redemption, 369).  Richard Longenecker explains, “What these preachers were conscious of, however, was interpreting the Scriptures from a christocentric perspective, in conformity with the exegetical teaching and example of Jesus, and along christological lines” (Biblical Exegesis in the Apostolic Period, 86-87). Their Christocentric, Kingdom-focused model of expository preaching was not novel or arbitrary it was modeled for them and taught to them by the master teacher.

Whereas the Jews continued to explore and extend the law as a means of achieving righteousness, as well as separation from the rest of the world, Christians found themselves forced, in the power of the Holy Spirit, to break down the old barriers and preach God’s free gift of forgiveness in Jesus Christ to all people everywhere. Without Christ, so radical a change of direction would hardly have been conceivable. He not only sent his followers off in a new direction, but changed their whole way of reading the Scriptures. This was apparent immediately, and it is highly significant that it was the nature of their expository preaching which first alerted the Jews to the radical message of both Jesus and his disciples . . . In all probability, the first Christians looked on every part of the Scripture as Christological” (Creeds, Councils and Christ: Did the Early Christians Misrepresent Jesus?, 50-51).

The very last verse in the book of Acts reminds us of how the gospel had marched from Jerusalem to Rome through the powerful apostolic preaching of the Kingdom of Christ when it tells us that Paul was “preaching the kingdom of God and teaching concerning the Lord Jesus Christ with all openness, unhindered” (Acts 28:31). T.D. Bernard writes, “Evidently on purpose are the two expressions combined in this final summary, in order to show that the preaching of the kingdom and the preaching of Christ are one” (as quoted in, F.F. Bruce, The Acts of the Apostles, 542-543). The apostles preached the meaning of all Old Testament promises as being fully understood only when they were mediated through Christ and his kingdom. David S. Dockery notes,

For the earliest believers, this meant that the living presence of Jesus, through his Spirit, was to be considered a determining factor in all their biblical exegesis and also that the Old Testament was to be interpreted christologically . . . Jesus became the direct and primary source for the church’s understanding of the Old Testament. The new paradigm developed because the prior paradigm lacked the Christological focus (Biblical Interpretation Then and Now: Contemporary Hermeneutics in the Light of the Early Church, 36, 44).

When the apostles were faithful to the preaching task Christ had given them the result was the continuation of the ministry of Christ through them. Luke begins Acts by reminding his readers that his “first account” (the gospel of Luke) was “about all that Jesus began to do and teach” (Acts 1:1). Thus, the Acts of the Apostles could be described as all that Jesus continued to do and teach through his preachers (F.F. Bruce, NICNT: The Book of Acts, 30). Roger Wagner asserts that “the preaching of the apostles in Acts is nothing less than the preaching of the risen Christ himself” (Tongues Aflame, 22). He had personally taught them how and what to preach and now the Spirit of the risen Christ was preaching through them (2 Cor 5:20; Eph 4:20-21; 1 Thess 2:13). Arturo G. Azurdia III perceptively warns preachers that their sermons will lack the power of the Spirit if they do not preach the text in light of Jesus Christ. He writes,

I have become convinced that preachers can rightly anticipate the Holy Spirit’s power only when they are resolutely wedded to the Holy Spirit’s purpose. What is His purpose? To glorify Jesus Christ through the instrumentality of the Old and the New Testament scriptures, both of which point to Him (Spirit Empowered Preaching: Involving the Holy Spirit in Your Ministry, 61).

As Graeme Goldsworthy states it, “Jesus exercises his kingly power through the scepter of his preached gospel” Preaching the Whole Bible as Christian Scripture, 55). The task of preaching the kingdom of Christ did not end with the apostles. Every indication we have is that the way we find them handling texts of Scripture for sermonic proclamation is not simply descriptive but prescriptive for all preachers “in these last days” (Heb 1:2) and must continue until “the end of the age” (Matt 13:49; 28:20; 2 Tim 2:1-2; 4:1-2).

Carl F. H. Henry wrote, “The apostolic view of the kingdom should be definitive for contemporary evangelicalism. There does not seem to be much apostolic apprehension over kingdom preaching” (The Uneasy Conscience of Modern Fundamentalism, 51). John Stott states, “The Acts of the Apostles have long ago finished. But the acts of the followers of Jesus will continue until the end of the world, and their words will spread to the ends of the earth” (The Message of Acts, 405). In the words of Jesus, “This gospel of the kingdom shall be preached in the whole world as a testimony to all the nations, and then the end will come” (Matt 24:14). Thus, D.A. Carson asserts, “So far as the kingdom has been inaugurated in advance of its consummation, so far also is Jesus’ church an outpost in history of the final eschatological community” (Matthew, in vol. 8 of The Expositor’s Bible Commentary, ed. Frank E. Gaebelein and J.D. Douglas, 370).

Models of preaching that are not Christocentric and Kingdom-focused, even the ones that function under the banner of expository preaching, are inadequate in driving churches toward health. Some models of expository preaching suffer from being atomistic. As Michael Horton rightly notes “this method isolates a text or the person or event from the whole fabric of redemptive history” (“What Are We Looking for in the Bible? A Plea for Redemptive-Historical Preaching,” Modern Reformation, May/June 1996, 5). Moralistic preaching almost always passes under the banner of expository preaching and is probably the most common form of inadequate exposition. Moralistic preaching presses ethical imperatives abstracted from Christ and his gospel. Such an approach tends to make the biblical message all about me instead of all about Jesus.

When Jesus was betrayed by Judas and arrested by the chief priests and elders there is a tragic and haunting statement recorded, “Then all the disciples left Him and fled” (Matt 26:56, this fulfilled the prophecy found In Zechariah 13:7). A few hours later, the Peter was sitting in a dark courtyard and when confronted by a servant-girl and bystanders about being a follower of Jesus he cowered in fear and “began to curse and swear, ‘I do not know the man!’” (Matt 26:74). No more than a couple months later we find him fiercely preaching the gospel of Jesus Christ and filled with boldness even as he stands before the utterly intimidating Jewish ruling council warning him not to speak in the name of Jesus (Acts 4:17-18) to which he and John replied “Whether it is right in the sight of God to give heed to you rather than to God, you be the judge; for we cannot stop speaking about what we have seen and heard” (Acts 4:19-20). When they were released from captivity they immediately went to the church and prayed, “And now, Lord, take note of their threats, and grant that Your bond-servants may speak Your Word with all confidence” (Acts 4:29).

It is impossible for us to imagine the sense of utter shock, the total dismay which engulfed the disciples at the crucifixion of Jesus Christ. . . .

[But now] Peter recognized that the death itself was part of the victory. . . . Christ was delivered up by the ‘determinate counsel and foreknowledge of God’ (Acts 2:23). . . . [Peter] looks up with the eye of faith, recognizing that he stands in the new age, the time of fulfillment, the time of the coming in of the kingdom of God with power. The evidence of that power is all about him and within him (Preaching and Biblical Theology, 65-66).

After the resurrection of Christ and his post-resurrection teaching regarding Christocentric interpretation of Scripture and the kingdom of God (Luke 24:27, 44-45; Acts 1:3) Peter understood all Scripture in light of the person and work of Jesus Christ and His Kingdom. This was evident in His newfound Christ-centered exposition of Old Testament texts. Peter and the other apostles had their lives and hermeneutics transformed by the realization of the centrality of Christ and His Kingdom. This Christ-centered, kingdom-focus, produced a commitment to the centrality of the gospel (1 Cor 2:2), provided eschatological hope that transcended temporal circumstances (2 Cor 4:16-18), empowered them for bold Christian witness (Acts 1:8), service (Col 3:23), and gave them a sacrificial love for the church (Col 1:24), which was Christ’s body (Eph 1:22-23).

The only thing that could produce this healthy fruit in the apostles lives and in the churches was the reality of the risen Christ and his kingdom, and the only thing that will produce this healthy fruit in the lives of the people in our churches today, is the reality of Christ and his kingdom. Christ-less pulpits, even in the name of biblical teaching, produce powerless churches that in the name of Christ undermine Christianity by convincing people Christianity can be lived out through moral reform or self-improvement. Edmund Clowney’s exhortation provide a fitting conclusion,

The Scriptures are full of moral instruction and ethical exhortation, but the ground and motivation of all is found in the mercy of Jesus Christ. We are to preach all the riches of Scripture, but unless the center hold all the bits and pieces of our pulpit counseling, of our thundering at social sins, of our positive or negative thinking—all fly off into the Sunday morning air. . . . Let others develop the pulpit fads of the passing seasons. Specialize in preaching Jesus! (“Preaching Christ from all the Scriptures,” in The Preacher and Preaching, ed. Samuel T. Logan, 191).