The Treasure Hid in the Scriptures is Christ – Irenaeus 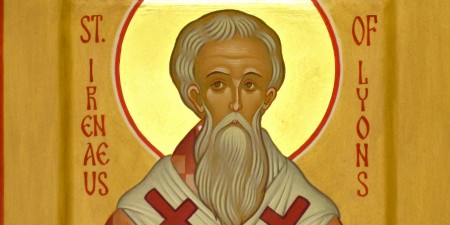 Irenaeus (ca. 125-202) was an early church Father and apologist whose writings were formative in the early development of Christian theology. He was born in Smyrna in Asia Minor, where he studied under bishop Polycarp, who in turn had been a disciple of the Apostle John. Leaving Asia Minor for Rome he joined the school of Justin Martyr before being made bishop of Lyons, France in Southern Gaul in about 178 AD.

His book, Demonstration of the Apostolic Preaching, is a classic that was written to strengthen the faith of believers. His most well known book, Against Heresies, was a defense of the faith against the heresy of Gnocticism. Irenaeus was committed to the organic unity of Scripture and an eschatologically-oriented view of redemptive history. According to Irenaeus, the whole of Scripture was a testament to Jesus Christ, whose incarnation was the preeminent eschatological event of the cosmos.

Irenaeus’s commitment to the unity of the Bible and his doctrine of the recapitulation of all things in Christ Jesus meant that the Son of God, the last Adam, would recover all that was lost in the first Adam. Jesus, the eschatological Adam, was the one in whom the entirety of redemptive history would be summed up. Thus, Jesus Christ was both the center and telos (end) of the biblical drama of redemption because Jesus is the only lens through which the Scriptural witness can be rightly understood.

Below I have added some headings to a selection form Irenaeus’s Against Heresies about the Christ-centered, eschatological nature of all Scripture:

The Treasure Hid in Scripture is Christ

If any one, therefore, reads the Scriptures with attention, he will find in them an account of Christ, and a foreshadowing of the new calling

[vocationis]. For Christ is the treasure which was hid in the field (Matt 13:44), that is, in this world (for “the field is the world,” Matt 13:38); but the treasure hid in the Scriptures is Christ, since He was pointed out by means of types and parables.

Hence, His human nature could not be understood, prior to the consummation of those things, which had been predicted, that is, the advent of Christ. And therefore it was said to Daniel the prophet: “Shut up the words, and seal the book even to the time of consummation, until many learn, and knowledge be completed. For at that time, when the dispersion shall be accomplished, they shall know all these things” (Dan 12:4,7). But Jeremiah also says, “In the last days they shall understand these things” (Jer 32:20). For every prophecy, before its fulfillment, is to men [full of] enigmas and ambiguities. But when the time has arrived, and the prediction has come to pass, then the prophecies have a clear and certain exposition.

Forming the Kingdom of Christ Beforehand

And for this reason, indeed, when at this present time the law is read to the Jews, it is like a fable; for they do not possess the explanation of all things pertaining to the advent of the Son of God, which took place in human nature; but when it is read by the Christians, it is a treasure, hid indeed in a field, but brought to light by the cross of Christ, and explained, both enriching the understanding of men, and showing forth the wisdom of God and declaring His dispensations with regard to man, and forming the kingdom of Christ beforehand, and preaching by anticipation the inheritance of the holy Jerusalem, and proclaiming beforehand that the man who loves God shall arrive at such excellency as even to see God, and hear His word, and from the hearing of His discourse be glorified to such an extent, that others cannot behold the glory of his countenance, as was said by Daniel: “Those who do understand, shall shine as the brightness of the firmament, and many of the righteous as the stars for ever and ever” (Dan 12:3).

Thus, then, I have shown it to be, if any one read the Scriptures. For thus it was that the Lord discoursed with the disciples after His resurrection from the dead, proving to them from the Scriptures themselves “that Christ must suffer, and enter into His glory, and that remission of sins should be preached in His name throughout all the world” (Luke 24:26, 47). And the disciple will be perfected, and [rendered] like the householder, “who bringeth forth from his treasure things new and old” (Matt 13:52).