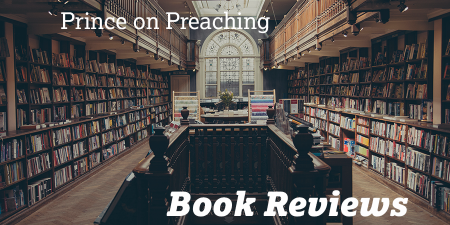 A Note to the Reader: A review copy was provided for the Prince on Preaching Blog which had no page numbers. Consequently, specific page references for quotes are unavailable.

There has not been one day in my life that I can remember that has not been affected by the Southern Baptist Convention (SBC) and her constituent churches. From the time I was two until I graduated high school, I was regularly involved at Eastwood Baptist Church in Bowling Green, KY. I became a Christian, and a convictional Baptist, in college and grew in grace at Porter Memorial Baptist Church in Lexington, KY. When my job took me to Louisville, KY, I joined Oak Park Baptist Church in Jeffersonville, IN, and when God brought me back to Lexington after giving me a wife, my wife and I became members of Ashland Avenue Baptist Church where we are to this day. Furthermore, I also recently graduated from The Southern Baptist Theological Seminary with a Master of Divinity degree. Consequently, I am wholly shaped by, indebted to, and thankful for the SBC and the churches associated therewith. And, I’m concerned for the well-being of this denomination as we move through the twenty-first century.

In The SBC & the 21st Century: Reflections, Renewal, & Recommitments, Dr. Jason Allen and a host of (mostly) denominational leaders have come together to offer historical reflection and sage insight on a myriad of issues confronting the SBC in the twenty-first century in order to give “descriptions of, and prescriptions for, our denomination’s future” (Preface). The first third of the book highlights the subjects of the SBC and cooperation with chapters dedicated to the Cooperative Program (CP), SBC demographics, the SBC and the broader evangelical community, and Baptist state conventions. The second third of the work shifts to SBC doctrine and distinctives with chapters concerning theological identity, intergenerational identity, regenerate church membership, ecclesiological distinctives, lessons from the Downgrade Controversy, and the SBC’s witness in the new sexual age. The final third of the book addresses SBC ministry and mission pertaining to spiritual renewal and strategic reinvention of the SBC, to the future of the International and North American Mission Boards, to theological education, to ethnic diversity, to preaching, and to guarding what has been handed down to this generation of Southern Baptists from generations gone by, most recently the fruits of the Conservative Resurgence.

One of the points that clearly resounds throughout the book is that Southern Baptists must be rescued from our attachment to the good works we are currently engaged in that keep us from acting most strategically toward accomplishing our mission of gospel propagation to the ends of the earth  (chs. 2, 4, 11, 15). Perhaps no area in SBC life needs such wisdom applied to it more than financial stewardship.

According to the statistics Frank Page lists in the first chapter of the book, state conventions keep sixty percent of all dollars given through the CP. Of the rest that makes it to the national convention, about half goes toward international missions. This means that only about twenty percent of all monies given through the CP makes it to the International Mission Board, and only some of what makes it to International Mission Board goes toward supporting missionaries on the field. We claim to be a Great Commission people, but the financial structure of the CP seems to indicate that we care way more about the millions in America than we do about engaging billions of lost people among the nations who have little to no gospel witness. At the convention level, Southern Baptists must restructure the way CP dollars are distributed in order to prioritize the needs of the nations if we truly expect to see people from every tribe bow the knee in worship to King Jesus. The structure of the funding strategy on paper and in practice must clearly be oriented to the nations in order to convincingly compel many Southern Baptists to believe that giving to the CP provides one of the most strategic opportunities for churches to faithfully invest their stewardship in for the global glory of Christ.

At the local church level, pastors must know that they will have to give an account to God Almighty for the stewardship entrusted to them (Heb. 13:17). The priority is gospel faithfulness (Matt. 25:14-31). For some pastors and congregations, the belief is that the most faithful way resources can be stewarded for the sake of the kingdom of Christ lies in directly supporting the International Mission Board and in Great Commission Giving that bypasses the CP. For many of these congregations, supporting the CP would be a priority if the priorities of the CP better reflected the Great Commission. Yet for other Southern Baptist congregations, being faithful might mean taking a courageous step toward fulfilling the Great Commission by starting to emphasize missions in the context of the local church. Perhaps this requires intentionally setting aside a little money to support a church plant, a missionary, or the CP itself. No doubt this demands that churches evaluate their budget for the upcoming fiscal year in light of the Great Commission to identify what good programs and staff could be eliminated for the sake of giving more to strategic Great Commission causes, including the CP.

Not only do conventions and local churches need to re-evaluate every ministry in light of its gospel necessity, every SBC member must look at his or her own life. In the Old Testament, people without the infinitely good news of Jesus Christ were required to tithe (Lev. 27:30-32). How much more should New Testament Christians who have experienced imaginably more grace on this side of the cross and resurrection give to proclaim the glory of Christ to the ends of the earth! If the gospel has laid hold of our hearts, our pocketbooks should overflow with a passion for the evangelization of the nations. How can we truly say we are people who desire to propagate the gospel to the ends of the earth when, on average, the SBC Great Commission Task Force indicated that Southern Baptists give just 2.5% of our income to the church? We—as individuals, as local churches, and as a convention—must indeed reflect upon the way we use the riches the Lord has given to us, and we must strategically commit ourselves and our resources to that which is most strategic to gospel propagation to the death of that which is simply good.

John Mark Yeats’ chapter clearly identifies one of the biggest theological elephants in the room that Southern Baptists seem to affirm in theory but reject in practice: regenerate church membership. With so many of our 15,000,000 members unaccounted for week after week, we are simply delusional in our practice of regenerate church membership. As Yeats quotes Russell Moore, “If church membership is a declaration of the church of a credible profession of faith, then the persistence on our church roles of so many who do not attend or openly reject the faith is not just a scandal to the gospel—it is anti-evangelism” (ch. 7). Yeats then lists several helpful steps we must take to reaffirm in practice our belief of regenerate church membership: offer instruction about membership, repent for our sin of chasing numbers, initiate membership classes, expect adherence to the church confession(s) of faith by members, and clean the roles. If we affirm regenerate membership, let us practice what we preach.

Finally, Jason Duesing’s chapter pertaining to ecclesiology for the church gets kudos for being the most theologically stimulating chapter of the book (ch. 8). Duesing attempts to apply Dr. Albert Mohler’s theological triage to ecclesiology in order to separate what defines a true church from what makes a true church a healthy church. Duesing argues that a true church consists of four key elements: the gospel is preached and proclaimed, baptism in some form is practiced, the Lord’s Supper is taken, and believers are intentionally gathered. Hence, Lutherans, Methodists, Baptists, Presbyterians, etc. can all be called true churches. However, churches that are well in being are shaped by the mode and practice of baptism, the mode and practice of the Lord’s Supper, the practice of church discipline, the practice of regenerate church membership, a commitment to the Great Commission, a commitment to expositional preaching, and a commitment to biblically designated leadership. Hence, Baptist churches would be considered churches with well-being based on their commitment to biblical principles related to secondary matters. Such a distinction is helpful when thinking about the nature of the church; however, such an understanding of the church seems to be a more loose confession than the Baptist Faith & Message 2000 (BF&M 2000) articulates. In addition to Duesing’s minimalist understanding of the nature of a true church, the BF&M 2000 requires that a church be autonomous local congregation of baptized believers. Would Duesing suggest revising the BF&M 2000 by beginning Article VI, “A healthy New Testament church…”? Regardless, ecclesiological triage certainly merits future discussion among Southern Baptists.

While much more could be said about The SBC & the 21st Century: Reflections, Renewal, & Recommitments, I heartily commend this small volume to all people concerned with the welfare of the Southern Baptist Convention in the days to come. I pray that this book will help spur the SBC toward critical evaluation, gospel sacrifice, and strategic vision casting for the propagation of the gospel to the ends of the earth. Thank you Dr. Allen and contributors for a well-balanced resource addressing and providing solutions to many of the complexities facing the Southern Baptist Convention in the twenty-first century.
Jon Canler, Outreach Coordinator and Pastoral Intern at Ashland Avenue Baptist Church