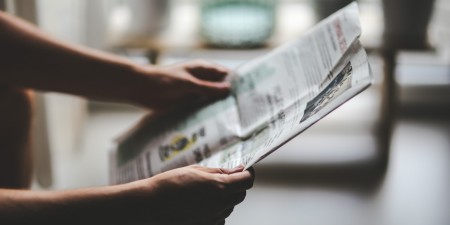 As followers of Jesus, when we look at our American culture we cannot help but be troubled by what we see. Marriage has been legally redefined. Now, agreeing with the almost unanimous testimony of human history, that using the restroom ought to be a gender specific activity will get you labeled a bigot. Planned Parenthood has been exposed selling the body parts of babies murdered in the womb, and that horror has been met with a virtual cultural yawn. Religious liberty is under assault, and racial tensions have heightened in many quarters. Our love of God and neighbor causes us to be rightly broken-hearted over these developments.

These and many others tragic realities should drive us to our knees in prayer. But we must resist the temptation to be governed by the bad news around us. We must not act as though this is a terrible time to be alive as a Christian in America because the opposite is true. In Acts 20, the Apostle Paul was returning to Jerusalem; he was confident that he would not see many of his friends and co-laborers in the church at Ephesus again. As he passed near Ephesus, he called the elders of the Ephesian church to see him. He wanted to remind them of what he had taught them and how he had lived among them. He wanted to prepare the Ephesian church to be the church.

The Christian Must Not be Governed by Bad News

As Paul begins his exhortation to the Ephesian elders, he paints a bleak picture for them. The words he uses are difficult words. Humility. Tears. Trials. Plots. Imprisonment. Fierce Wolves. Teachers teaching twisted things. These are not the way any person would plan things, yet, this is how things had turned out for Paul. He knew what it meant to suffer, weep, face persecution, and be separated from those he loved. And Paul knew that the Ephesian church, people he cared for, would face similar troubles.

Paul knew that the danger of consistently facing bad news is that a person begins to be governed by the difficulty—defined by it. And when that happens, the difficulty is all you see. You start to think things like, “I serve God, why do I have to go through this?” “Why would God allow me, as a Christian, to go through this hurt?” “Doesn’t God care about me?” When we think like this, we are allowing bad news to become our master. No matter how much you rage, you cannot stop it. You cannot control your circumstances. To think in this way  is a pathway to filling our hearts with discontentment and bitterness.

Paul reminds the Ephesian elders of what he faced and how he lived among them, not because he wants self-pity, but because he wants them to have gospel hope. He doesn’t want them governed by the bad news all around them. He is trying to prepare them honestly for what is ahead. It’s a dangerous thing to be in a war, thinking that you were on a vacation. Paul is an excellent, bold leader. He is reminding the Ephesian elders and reminding us that we are soldiers. We are in a war, a spiritual war. We should expect to face difficulty. Even our Lord and Savior was crucified.

The Christian Must be Governed by Good News

How do we keep ourselves from being governed by bad news? How do we keep ourselves from bitterness and discontent? Acts 20:32 holds the answer–the Good News of Jesus Christ: “And now I commend you to God and to the word of his grace, which is able to build you up and to give you the inheritance among all those who are sanctified.” This admonition from Paul is a clear call to preach the Gospel to ourselves. We must live based on the Gospel and not based on our emotions. In Galatians, Paul writes about walking “in step with the truth of the Gospel,” (Gal 2:14). His exhortation means that believers in a fallen world full of bad news can live based on the Good News. The church is to be the community governed by the Good News.

Like Paul, we must make a radical commitment to be governed by Gospel truth, rather than our emotions, or the bad news on the 24-hour news shows. If bad news becomes our most prevalent reality, then our emotions will enslave us. But Gospel truth will always set us free. Paul is moved by the bad news he saw, but he was not governed by it. We know this because no matter the circumstance, Paul did not stop expectantly and passionately proclaiming the Gospel. If we would have our lives defined by good news, we must do the same. For the Christian, bad news is the shadow and Good News is the eternal reality.