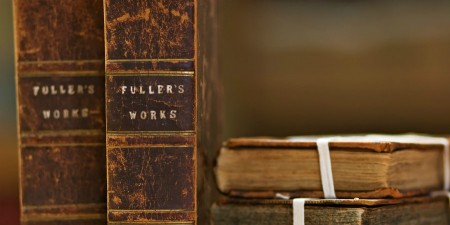 The article printed below is one that Andrew Fuller (1754-1815) wrote for Evangelical Magazine; it was titled “Thoughts on the manner which divine truth is communicated in the Holy Scriptures.” In the article, Fuller explains that God did not reveal himself to us in an abstract and hyper-systematized fashion, but rather in the context of particular examples in redemptive history. Fuller describes biblical truth as being introduced “incidentally,” by which he is not rejecting God’s purposeful intention in Scriptural revelation, but rather is noting that God reveals doctrinal truth to us embedded in his historical interaction with his image bearers. Fuller does not use the term biblical theology, but that is the label we would attach to what he is advocating.

I have updated some of the spelling and removed the sections where he illustrates by pointing to how the Scriptures teaches the doctrines of creation, the perfections of God, the moral government of God, sin, the Trinity, the mystery of godliness, and atonement. Fuller explains that the way God has chosen to reveal himself, reflects his wisdom, allows us to be exposed to the whole mind of God as expressed in Scripture, and attempts to safeguard us from as picking and choosing certain doctrinal categories and embracing them out of proper biblical proportion. Thus, as we hear and learn the Bible on its on terms, we gradually gain a better understanding and commitment to biblical doctrine and principles without even recognizing them as such. There is much here for the expository preacher to learn about how to more faithfully proclaim the Scriptures.

It is a fact which must have struck every attentive reader, that God has not communicated his mind to us by giving us a set of principles, arranged in the form of a scheme; or that we have no such creed as formally includes all the things necessary to be believed in either the Old or New Testament. On the contrary, we see Divine truth introduced rather incidentally than systematically. It is scattered from one end to the other, through all the historical, devotional, prophetic, and epistolary writings.

I have no intention to derive an argument from this, as some have done, against creeds and confessions of faith; nor do I conceive that such an argument can hence be fairly derived. We might with equal justice argue against the science of botany being reduced to a system, on the ground of herbs and flowers of the same kind not growing together, but being scattered over the earth in beautiful variety. The variegated face of nature is not marred by its productions being scientifically collected and arranged: on the contrary, its beauties are so much the better understood.

Yet, with respect to the actual position of the products of nature, we must needs decide in favor of variety; and the same may be said of the actual position of Divine truth in the Holy Scriptures: the incidental manner in which it is commonly introduced gives it great energy and beauty. It may be worthy of attention to consider a few of the incidents and occasions on which some of the most important truths are introduced, and to notice the wisdom of God in his thus introducing them.

It is not very difficult to discern the wisdom of God in introducing truth in such a manner. If every species of plants and flowers were to grow together, instead of the whole being scattered over the earth, the effect would be very different, and much for the worse; and if all truth relating to one subject were to be found only in one book, chapter, or epistle, we should probably understand much less than we do. There are some Divine truths which are less pleasant than others. Even good men have their partialities, or favorite principles, which would induce them to read those parts of Scripture which favored them, to the neglect of others. But truth being scattered throughout the Scriptures, we are thereby necessitated, if we read at all, to read the whole mind of God; and thus it is that we gradually and insensibly imbibe it, and become assimilated to the same image. The conduct of God in this matter resembles that of a wise physician, who, in prescribing for a child, directs that its medicines be mixed up with its necessary food.

Moreover, Scripture doctrines being introduced in some practical connection, we learn them in that connection. The occasions and ends of truth being associated in our minds with the truth itself, the great design of God in giving us a revelation, which is to sanctify our spirits and fit us for every good word and work, is more effectually answered. To one that has learned truth from the Scriptures, and in whom it dwells richly, in all wisdom and spiritual understanding, it is scarcely possible to think of a doctrine but in connection with its correspondent duties, or of a duty without the principles by which it is enforced.

Once more, Truth being introduced in connection with some case or incident, it more readily occurs to us, when such case, or something similar to it, becomes our own. If, through distrust of the Divine power and goodness, and with hope of better accomplishing my object, I be tempted to turn aside from the straightforward path of uprightness; having once read and felt the story of Abraham, and the admonition that was given him on that occasion, it is much more likely to occur to my mind, and to correct my folly, than if I had barely read that God was “Almighty,” or had only found a general admonition to “walk before him, and be perfect.”

Or if I be tempted to sink in despondency on account of dark and intricate providences, having read of the promises of God to Jacob, of his subsequent fears, and of the happy issue, such promises are much more likely to be a ready remedy than if I had barely read, unconnected with any particular case, that God will surely do his people good. In the one case truth is laid down, as it were, in abstract propositions; in the other, it is illustrated by particular examples.