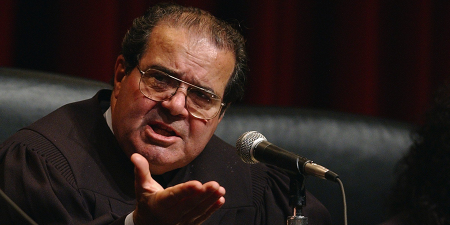 Supreme Court Justice Antonin Scalia wrote opinions on complex legal matters in a way that was clear, punchy, profound, prophetic, and even entertaining. With Scalia’s recent death, America has lost a champion of liberty and an ardent defender of the U.S. Constitution. Scalia was a public intellectual who was unapologetic about his Roman Catholic faith.

Scalia’s most enduring cultural legacy will be his fierce opposition to judicial activists who refused to take the original meaning of the Constitution seriously, in favor of what they deemed a living or evolving Constitution. Scalia described their misguided interpretive approach in his famous quote, “What is a moderate interpretation of the text? Halfway between what it really means and what you’d like it to mean?” (source).

It’s common to hear Scalia’s approach to Constitutional interpretation described as a commitment to original authorial intent or strict constructionism. For instance, Ann Woolner, wrote a scathing assessment of Scalia’s methodology asserting, “Here we have a perfect example of what’s so very wrong about so-called originalism, the theory Scalia claims to follow. The idea is that the Constitution should be interpreted according to its author’s original intent, no changes allowed” (emphasis added – source ). Since Scalia’s death he has been repeatedly described in the media as being committed to the framer’s original intent in interpreting the Constitution.

The problem with that reading of Scalia is that he went out of his way to point out that his approach to constitutional originalism was not rooted in authorial intent or best described by strict constructionism.

So what was Scalia’s approach?

Scalia was a textualist who was committed to pursuing the original meaning of the text :

I am an originalist, I attempt to give the text the meaning it bore when it was written. … I don’t like the term “strict construction.” I do not think the Constitution, or any text should be interpreted either strictly or sloppily; it should be interpreted reasonably. Many of my interpretations do not deserve the description “strict.” I do believe, however, that you give the text the meaning it had when it was adopted  (source).

Scalia intentionally distinguished his Constitutional approach of pursuing original meaning (sometimes referred to as public meaning) from an approach rooted in the pursuit of the framer’s original intent:

It is curious that most of those who insist that the drafter’s intent gives meaning to a statute reject the drafters intent as the criterion for interpretation of the Constitution. I reject it for both (Scalia, A Matter of Interpretation: Federal Courts and the Law, Princeton University Press, 1998: 38).

What was the most plausible meaning of the words of the Constitution to the society that adopted it– regardless of what the framers might secretly have intended? (Attorney. General’s Conference on Economic Liberties, Washington D.C., June 14, 1986, Appendix C, A Report to the Attorney General).

Scalia did not believe that the original intent of the Constitutional draftsman was ascertainable. But more importantly, Scalia also did not believe that ascertaining that original authorial intent was where the locus of Constitutional meaning was to be found anyway. Scalia argued vehemently that people are governed by laws and not a draftsman or legislator’s intent. He feared that pursuing the drafter’s or legislature’s intent opened that door for judicial subjectivism and activism. He was not fan of judicial activism, whether it be liberal or conservative.

The carefulness, clarity, conviction, and reverence with which Scalia treated the Constitution, and his courage to defend it, should inspire Christians who cling to the Bible as the infallible and eternal Word of God. As vital and enduring as the U.S. Constitution has been, it will not endure forever. Scalia championed national liberty in his unceasing defense of the Constitution, may we be relentless and fierce and champions of gospel liberty with unwavering commitment to the Scripture.

In 1996, Scalia spoke at the Mississippi College School of Law’s Christian Legal Society and said, “We must pray for the courage to endure the scorn of the sophisticated world. ‘We are fools for Christ’s sake” (source). Twenty years later, Scalia is gone, may we remember him with gratitude, and may join him in praying that would be willing fools for Christ’s sake.