Joy to the World – Christmas and the Second Coming 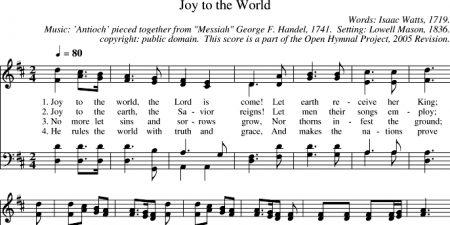 Isaac Watts is often called the father of English hymnody. He wrote Joy to the World in 1719, as a celebration of Christ’s second coming, not his first advent. Nevertheless, it has become one of the best-loved Christmas songs in the world, which is fitting since Christ’s first coming in the incarnation and second coming to consummate his kingdom are parts of the same eschatological event. Consider Watts words this Christmas while remembering that Christ’s flesh-and-blood incarnation as the light of the world and future bodily resurrection of believers from every tribe, tongue, and nation is to be reflected in the multiethnic unity and joy of his people and his churches here and now (John 8,9, 11, Eph 2, Rev 5, 7).

The Messiah’s coming and kingdom

1 JOY to the world; the Lord is come;
Let earth receive her king:
Let ev’ry heart prepare him room,
And heav’n and nature sing.

2 Joy to the earth the Saviour reigns;
Let men their songs employ;
While fields and floods, rocks, hills, and plains
Repeat the sounding joy.

3 No more let sins and sorrows grow,
Nor thorns infest the ground:
He comes to make his blessings flow
Far as the curse is found.

4 He rules the world with truth and grace,
And makes the nations prove
The glories of his righteousness;
And wonders of his love (Works, vol. 9 1813: 93).

Watts hymn was based on his meditation on Psalm 98:4-9:

Let the sea roar, and all that fills it;
the world and those who dwell in it!
Let the rivers clap their hands;
let the hills sing for joy together
before the LORD, for he comes
to judge the earth.
He will judge the world with righteousness,
and the peoples with equity.

Watts believed the Psalms of David ought to be translated into explicitly Christian songs for the use of the church according to the clearer revelation of the Gospel in the New Testament (Works, 1813, vol. 9: 1-3). He unapologetically approached the Scriptures prejudiced by Christ and his Kingdom: “There are also many deficiences of light and glory, which our Lord Jesus and his apostles have supplied in the writings of the New Testament; and with this advantage I have composed these spiritual songs, which are now presented to the world” (Works, 1813, vol. 9: 128). Watts complained of the “dull indifference” that many demonstrated in corporate worship. He longed to make the gospel more real and accessible in worship. Watts asserted, “In these last days of the gospel we are brought almost within sight of the kingdom of our Lord; yet we are very much unacquainted with the songs of the New Jerusalem, and unpractised in the work of praise” (Works, 1813, vol. 9: 127).

Songs are generally expressions of our own experiences, or of his glories; we acquaint him what sense we have of his greatness and goodness, and that chiefly in those instances which have some relation to us: We breathe out our souls toward him, and make our addresses of praise and acknowledgment to him (Works, 1813, vol. 9: 8–9).

Psalm 98, traces the path of redemptive history from the first gospel promise in Genesis 3:15 to eschatological consummation in a New Heavens and New Earth. Psalm 98, begins with praise to God as King who has saved Israel in the past (98:1-3), then the Psalm issues a call for the whole world to praise God as King in the present (98:4-6), and concludes calling the entire cosmos to praise God as Judge and King (98:7-9). Commentating on Psalm 98, Augustine explained, to rightly understand Psalm 98 (and the entire OT) was to be “well-instructed in the school of Christ” (Works: Expositions of the Psalms, 2002, vol. 4:466). Watts understood that to speak of Christ rightly; one must speak of his mission, and he powerfully captures the triumph of the Kingdom of Christ foreshadowed in Psalm 98 in his hymn Joy to the World.

Though Watts never intended for Joy to the World to be a Christmas hymn, it is a very appropriate one. Singing Joy to the World in celebration of the incarnation helps keep us from a merely sentimental celebration of Christmas because it directs us toward his gospel mission. As Paul writes, “But when the fullness of time had come, God sent forth his Son, born of woman, born under the law, to redeem those who were under the law, so that we might receive adoption as sons” (Gal 4:4-5). Jesus was born as the warrior baby who would crush the head of the serpent (Gen 3:15) and deliver his people through the triumph of his crucifixion, resurrection, and the consummation of his Kingdom in the second coming.

Responding to the Christ-centered biblical reality that Watts powerfully captured in Joy to the World means living our lives in obedience to the Great Commission of our Lord Jesus. Christmas should always drive our thinking to the promised consummation of Christ’s Kingdom. As we live in the overlap of the ages we must preach the gospel of the Kingdom as far as the curse is found.