“Did I attack his children? Of course not.”

That was Joel Pett’s response to the criticism surrounding the cartoon below that he drew for his employer, the Lexington Herald-Leader.

Kentucky Governor-elect Matt Bevin and his wife have had six biological children. Their oldest daughter Brittiney, died at age 17 near the family’s home in 2003 after a car accident. They also have four children they adopted from Ethiopia. In responding to the Syrian refugee crisis, Governor-elect Bevin joined other governors across the country in opposing the resettlement of Syrian nationals in Kentucky at this time citing potential security concerns. A survey of the facts indicates that Matt Bevin, an outspoken Christian, and father of adopted children from Ethiopia, believes he has legitimate security concerns in opposing the resettlement of Syrian nationals in Kentucky. It is obvious that he is a compassionate man, with a heart for people regardless of their nationality. But propagandists like Joel Pett do not want to be confused with the facts. 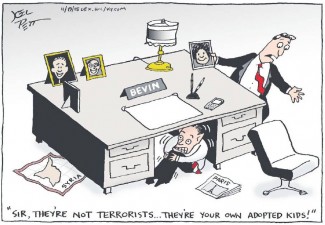 Pardon us if we do not acquiesce to your judgment on this matter, Mr. Pett, by accepting your “Of course not,” as an explanation, since your judgment is the very thing in question. Pett suggests that critics of his cartoon do not celebrate freedom of speech and are akin to those in countries like “Iran or Syria, where questioning the leadership is met with fury and worse.” It is an interesting comment since I have not seen one person suggest that Pett and the Herald-Leader do not have the freedom of speech to run such a cartoon. The real issue is that propagandists like Mr. Pett only want freedom of speech to run in one direction. They certainly have the freedom to put out this kind of disgraceful rhetoric with its racist implications and willingness to use Governor-elect Bevin’s children as political props and we have the freedom of speech to call it exactly what it is and respond accordingly by not funding such rhetoric.

I happen to disagree with Governor-elect Bevin and others on this issue and believe that we can take appropriate security measures and compassionately provide safe-haven to Syrian refugees. The church I serve as pastor, Ashland Avenue Baptist Church, is full of families with children adopted from around the world. We recently hosted a Thanksgiving meal for international students and refugees that was attended by people from 32 different nations. I also recently stood in the hospital in Israel, and was moved as I spoke to medical personnel who were Jewish, Muslim, and Christian, who have all been treating Syrian refugees. I strongly believe that we should not give in to evil terrorists by becoming self-protecting global isolationists

My concern about Mr. Pett’s vile cartoon is not a desire to oppose honest, open, and vigorous political discourse but rather that his cartoon was a prime example of the lack of it. It is an example of dishonest and hateful propaganda that distorts the facts for cheap political gain is willing to use children to do so. Matt Jones of Kentucky Sports Radio fame, and an outspoken liberal Democrat said in response to the cartoon, “Matt Bevin and I disagree on a lot and who knows what kind of Governor he will be, but his adoptions should be praised, not mocked.”

The fact that the Lexington Herald-Leader and Mr. Pett did not apologize but instead doubled down in their defense of the cartoon should be all the information reasonable people need. They certainly have the freedom of speech to do so but decent people ought to make sure that the only people who fund their endeavor are those who think it is legitimate to use children and their ethnicity as political pawns.