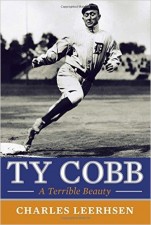 Charles Leerhsen seeks to tell the story of Ty Cobb, which he believes has not been told because Cobb’s life has been shrouded in the “Ty Cobb” myth. He lays the blame for the Ty Cobb myth primarily at the feet of Al Stump, the man who collaborated with Cobb on his 1961 autobiography, “My Life in Baseball.” Cobb died in July of that year, and in December Stump published an article in True magazine that claimed to document the real, and really foul, character of his subject. According to Stump, Cobb was pathologically violent man, who was filled with hate, and an arch racist. He also blames the movie “Cobb,” that was based on Stump’s 1994 biography of Cobb that was subtitled “the meanest man who ever played baseball.”

The book is a thorough defense of Ty Cobb, not as a saint, but as a decent man, a fierce but clean baseball player, and an intellectual of sorts when compared to other major league players of his era. Leerhsen does not attempt to hide Cobb’s thin skin and quick temper but he attempts to place Cobb as a man of his time who should be evaluated as such. Convincingly, he argues that the notion that Cobb was an ultra racist is simply fiction. He notes that Cobb’s only comments about race were when he praised black players, including Roy Campanella and Willie Mays, and spoke out in favor of the sport’s integration. “The Negro should be accepted and not grudgingly but wholeheartedly,” he said in 1952. Occasionally, Leerhsen’s defense of Cobb seems a bit overdone as when he suggests Cobb’s hazing as a young major leaguer explains his consistent brawling that once resulted in beating a teammate unconscious.

This is a delightful book full of facts and information but it is an engaging read about a fascinating player who was the first professional sports superstar. Every baseball fan should read this book and reconsider what you thought you knew about the “Georgia Peach”. Cobb is unquestionably one of the greatest to ever play the national pastime and perhaps he was decent guy as well. 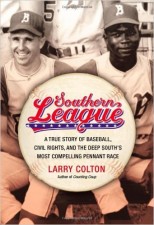 Larry Colton’s Southern League focuses on the 1964 season of the Birmingham Barons. He unfolds a fast-moving account of a young baseball team—an integrated team—white, black, and Hispanic, trying to make their way to the big leagues. What made this particular season distinct was that it was the first year this Alabama minor league baseball team was integrated, in a city boiling with racial tension. One year earlier, a Baptist church in Birmingham was bombed on a Sunday morning killing four young girls and injuring 20 others, a crime committed by members of a group affiliated with the Ku Klux Klan, which had an active presence in Birmingham. These events took place in a city where the notorious segregationist, “Bull” Conner was the commissioner of public safety.

Colton looks at many people inside the club focuses on two black players, Johnny “Blue Moon” Odom and Tommie Reynolds; two white players, Hoss Bowlin and Paul Lindblad; and their manager, Haywood Sullivan, a former Kansas City Athletics catcher. Colton leads us through the ups and downs of personal and mutual troubles faced by these young men and others during this tumultuous season. Colton has a straightforward writing style, and his narrative places the reader right in the thick of it.

Colton was a professional baseball player himself during this time and he write with obvious baseball insight and the pathos of someone who knows and loves the game. Bear Bryant, famed Alabama football coach who was a regular at the Barons’ games shows up in the narrative as does the flamboyant Charlie Finley, who hailed from Birmingham and was the owner of the Kansas City Athletics, the major league team that controlled the Barons’ players and the team’s fate. The book will be an entertaining read for any baseball fan but will also benefit anyone in understanding the tumult of a major city in the deep South struggling to embrace Civil Rights for black Americans.

This collection of letters reveals new facets of the baseball and Civil Rights icon. The correspondence ranges from 1946 to 1972, with such pen pals as Dwight Eisenhower, John F. Kennedy, Martin Luther King, Malcolm X and Barry Goldwater. Among the more fascinating exchanges are Robinson’s dialogues with Richard Nixon over civil rights; his conciliatory responses to vitriolic missives from Malcolm X and Adam Clayton Powell accusing him of an “Uncle Tom” stance; his blistering note to Mississippi segregationist James Eastland on prejudice; and his quest to make the Republican Party color-blind with notes to Nelson Rockefeller and Goldwater. The correspondence was assembled by Elizabethtown College religious studies professor Michael G. Long and the letters trace Robinson’s political life, they reveal a man deeply embedded with American hope but time and again has to face the reality of a tarnished American dream. Robinson was as loyal and courageous off the baseball diamond as he was on it. In his own estimation he said, “I think I’ve been much more aggressive since I left baseball.”

Consider the following excerpt from a December 14, 1963 letter Robinson wrote in response to criticism from Malcolm X:

Frankly, your letter to me in the New York Amsterdam News is one of the things I shall cherish. Coming from you, an attack is a tribute. I am also honored to have been placed in the distinguished company of Dr. Ralph Bunche, whom you also attacked. … Personally, I reject your racist views. I reject your dream of a separate state. I believe that many Americans, black and white, are committed to fighting for those freedoms for which Medgar Evers, William Moore, the Birmingham children and President John F. Kennedy died. Those of us who are so committed have no intention of supporting the idea of a separate black state where the Honorable Muhammad can be the rule and you his immediate successor—and all because you, Malcolm, hate white people. … You mouth a big and bitter battle, Malcolm, but it is noticeable that your militancy is mainly expressed in Harlem where it is safe (186-188).

Pete Rose was one of my favorite baseball players as a kid. I began to slide headfirst into bases and run full speed to first base after a walk because that was what Pete Rose did. Rose is without a doubt one of the great players of major league baseball history and a truly great American story as a poor kid from Cincinnati wound up the biggest star in the game playing for his hometown club. Nevertheless, Pete Rose is not in the baseball Hall of Fame because there is a tragic side of the Pete Rose story.

It has been nearly a quarter-century since Rose received a lifetime ban from Major League Baseball and is ineligible for election to the baseball Hall of Fame for betting on games. On the first page of Kostya Kennedy’s book Pete Rose: An American Dilemma he asks the question, “Does Pete Rose belong in the Hall of Fame?” Kennedy presents a clear case for his worthiness in the Hall of Fame as a player. Rose played in more games, came to bat more times, got more hits, and dirtied more uniforms than any player in major league history. He batted over .300 fifteen times, played in 17 All-Star games, and his 44-consecutive-game hitting streak in 1978 is second only to DiMaggio’s 56 straight games in 1941.

The book is well researched and provides a sober and often tragic analysis of Pete Rose’s life, career and legal troubles. The volume provides some fresh information and insight as well. While he does not pretend to answer the “dilemma” that is Pete Rose he does present it with striking clarity. Was Pete Rose an inspiring overachiever who in many ways was everything that was right about baseball or was he an egomaniac who was a boorish disgrace to the game that provided him everything. I think the answer is “yes.” The book jumped around a bit rather than following a chronological sequence but the approach is not too distracting. In the end it seems Kostya favors Rose in the Hall of Fame while I emphatically would say no if anyone wanted my opinion. Nevertheless, I would recommend any baseball fan to read this excellent volume.