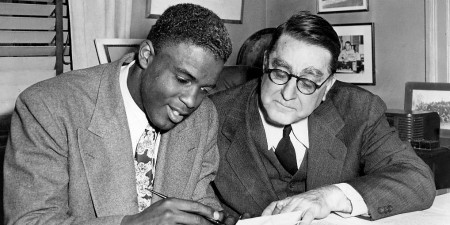 The number “42” is sacred in Major League Baseball. On April 15, 1997, it became the only number retired throughout the entire league. It is prominently displayed in every Major League park. Forty-two is synonymous with the man who most famously wore the number on his jersey — Jackie Robinson. Beginning in 2004, Major League Baseball permanently named April 15th Jackie Robinson Day each year, marking the day in 1947 when Robinson, a 28-year-old rookie, courageously ran onto Ebbets Field transforming one of the most sacred spaces in American culture.

The lionization of Robinson as a significant hero of civil rights in America is heartening but there is an oft-forgotten hero of the saga. Jackie Robinson and Branch Rickey, the Brooklyn Dodger president who signed Robinson, were equally indispensible partners in what Rickey deemed the “great experiment.”

Rickey meticulously planned and shaped the master narrative for integrating the national pastime but it could not have been accomplished without a unique player of great ability, personal courage, and unfathomable self-control. Rickey said of Robinson, “God was with me when I picked Jackie. I don’t think any other man could have done what he did those first two or three years.” And Robinson would say that in his estimation Rickey did more for African Americans “than any white man since Abraham Lincoln.”

Looking back on his role in the integration of baseball Robinson concluded, “I must tell you that it was Mr. Rickey’s drama and that I was only a principal actor.” Robinson’s overstated, self-deprecating, observation is helpful in remembering that breaking the color barrier in baseball did not begin with the “great experiment.” Mr. Rickey’s drama began with his family’s Midwestern Baptist and Wesleyite Methodist roots. His father was described as a “pious, devout, religious man … a genuine New Testament Christian” and his mother is said to have taught Branch countless Scripture stories even before he could read. Biographer Murray Polner described Rickey as a conservative evangelical Christian whose religious faith was the decisive factor in his commitment to racial equality. Rickey would often repeat the family motto he learned as a child, “Make first things first, seek the Kingdom of God, and make yourself an example.”

Biographer Jimmy Breslin argues, “It was Rickey who broke the color line in baseball” and his motive was that “he thought it was God’s work.” Breslin unflinchingly states, that because of the consequences, Rickey accomplished “the single most important act in the history of this nation.” Rickey said, “I believe a man can play baseball as coming to him from a call of God.” Looking back on Rickey’s life and legacy, one would have to conclude that he viewed being a baseball executive as a call of God as well.

Branch Rickey was a baseball man to the core. He loved the game from childhood. Playing professionally for the St. Louis Browns, Rickey told a reporter his goal in life was “to be both a consistent Christian and a consistent ballplayer.” By all accounts, he was successful in the former but his professional playing career was less than stellar. He possessed a career batting average of .239 with three home runs in three seasons and as a catcher he holds the record for allowing 13 stolen bases in a single nine-inning game. In 10 years as a Major League Baseball manager, Rickey accumulated a pedestrian 597 wins and 664 losses.

In 1926, Rickey moved exclusively into his role as a baseball executive that would lead into his induction in the baseball Hall of Fame. Rickey-led teams won four World Series championships in his 29 years. He revolutionized baseball and gained a competitive edge over other clubs by his innovation of using farm clubs to develop players for the big league club. Rickey was known as a Bible-quoting, tight-fisted Republican, a fierce competitor, and a shrewd negotiator whom players referred to as “El Cheapo.” It was said that Rickey’s everyday speech resembled a sermon and second baseman Eddie Stankey once retorted after negotiating his contract with Rickey, “I got a million dollars’ worth of free advice and a very small raise.”

In 1903, Rickey was the 21-year-old head baseball coach at Ohio Wesleyan University when his Christian conviction collided head on with his love for the great game. Charles Thomas was recruited by Rickey to play catcher and was the only black player on the team. OWU traveled to South Bend, Ind., for a game against Notre Dame. When they arrived the hotel clerk refused to allow Thomas to stay because of a whites-only policy. Rickey persuaded the hotel to allow Thomas to go to his room and later requested a cot. That evening Rickey found his catcher sobbing and rubbing his hands and arms convulsively while muttering, “It’s my skin. If only I could wipe off the color they could see I am man like everybody else!” Rickey told him to “Buck up!” and said, “We will beat this one day!” but later noted, he never felt so helpless and vowed at that time that he would do whatever he could to end such humiliation.

As an executive for the St. Louis Cardinals, Rickey unsuccessfully pushed for an end to segregated seating at the park and tested the waters for racial integration of the team but feared that a premature attempt in the wrong place would set back the cause. When Rickey left the Cardinals for the Brooklyn Dodgers in 1942 he immediately took the initiative to integrate baseball. The cultural moment and the location of the Dodgers in Brooklyn made it an opportune time for Rickey to act. Americans of all races were fighting in World Ward II against racist ideology in Europe while racist Jim Crow laws were in place back home. The tragic irony was slowly becoming apparent to many Americans. In Brooklyn, Rickey was in a place where he could make a credible case to ownership of potential profits if they were the first club to sign black players. Rickey used his business acumen to serve his conviction that segregation was morally indefensible.

In March 1945, Branch Rickey met at Joe’s restaurant with Red Barber, the beloved Dodgers broadcaster, to tell him of his plan to sign a black man to play for the Dodgers. Barber was initially appalled but recalls Rickey telling him that he had to act because he had heard Charles Thomas crying for 41 years. At that time, he did not know who that player would be but later that summer scouts had narrowed the list down to a handful of players. It seems the initial plan was to sign several players at once but instead Rickey settled on Jackie Robinson.

In their first meeting, Aug. 28, 1945, Rickey stunned Robinson with the news he wanted him to play for the Brooklyn Dodgers. He grilled him for hours and made him commit to three years of non-retaliation. Rickey read to him from Giovanni Papini’s book “Life of Christ” and pointed him to the biblical account of Jesus’s Sermon on the Mount. Rickey told Robinson, “We can’t fight our way through this Robinson. We’ve got no army. There’s virtually nobody on our side. No owners. No umpires. Very few newspapermen. And I’m afraid many fans will be hostile. We’ll be in a tough position. We can win only if we convince the world that I’m doing this because you are a great ball player and a fine gentleman.”

Rickey believed that the right player, who was also the right person, full of moral courage, willing to commit to non-retaliation for three years — except with his play on the field — could end what he called an “odious injustice.” There is a sense in which Rickey laid out an incipient strategy that would be later utilized by Martin Luther King Jr. in the larger Civil Rights movement. Rickey said about signing Robinson, “I couldn’t face my God much longer knowing that His black creatures are held separate and distinct from His white creatures in the game that has given me all I own.”

In his excellent biography on Branch Rickey, Lee Lowenfish describes him in the sub-title as “Baseball’s Ferocious Gentlemen.” What an apt and powerful description. He was ferocious. Journalist John Chamberlain described Rickey as “one of the slyest men who ever lived, but in all fundamentals, a man of honor.” He was passionately driven to succeed and made no apologies for turning a profit in the process. Yet his aggression and fierceness were guided by his Christian conviction and worldview. His life embodied Jesus’ admonition to His disciples, sheep in the midst of wolves, to “be wise as serpents and innocent as doves” (Matthew 10:16).

On November 13, 1965, Branch Rickey stepped to the podium to speak after having been inducted into the Missouri Sports Hall of Fame. Baseball’s ferocious gentleman had left the hospital against the advice of his doctors because, as he often said, “it is better to die ten minutes sooner than to live doing nothing.” He rose to speak about a topic he had lived — courage. He spoke of having objectives on which there is no price and began to tell the biblical story of Zaccheus, who he said, “Had the greatest amount of courage of any man in the Bible.” He did not get to finish telling about one of his favorite biblical characters because — while still speaking — he collapsed, and less than a month later died.

Perhaps adding one word to Lowenfish’s descriptive title of Rickey would prove helpful — Baseball’s Ferocious Christian Gentleman. But I fear the moniker, “ferocious Christian gentleman” sounds oxymoronic in contemporary evangelical circles where manhood is often reduced to being a nice guy and God is envisioned as a kind of cosmic smiley face. Where Christian discipleship is cheapened to generic niceness, men pursue comfort and respectability in the place of self-sacrificial “great experiments” that demand ferocious Christian gentlemen.

Billy Graham said of Branch Rickey, “He was a man of deep piety and integrity — that rare combination of a ‘man’s man’ and a Christian man, at the same time.” Here’s hoping Graham is wrong and the combination is not so rare, because our churches are in desperate need of some ferocious Christian gentlemen.