Amazing Grace for Every Race and the ERLC Leadership Summit 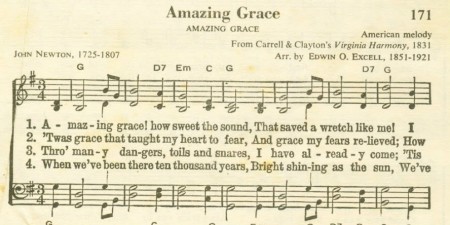 Amazing grace! (how sweet the sound)
That saved a wretch like me!

The man who wrote the hymn Amazing Grace had once earned his living as the captain of a slave ship. On those slave ships, the captured people were treated as sub-human cargo and often died from abuse, disease, and persecution on the voyage. The sailors on the voyages frequently raped women. Newton described in a letter to a friend a horrific slave ship practice he described as jointing. The sailor would begin to dismember a slave with an axe at his bodily extremities (feet, knees, wrists, elbows …), until the body was simply a trunk and then he would sever the head and toss it among the sea of chained slaves (Jonathan Aitken, John Newton: From Disgrace to Amazing Grace, 325-326).

John Newton (1725-1807) is primarily remembered as the author of America’s most beloved hymn, Amazing Grace. The story of that song and its rise to immense popularity is a testimony to the astounding gracious providence of God. It is a story that reminds us of vital gospel truth that should shape our lives and relationships. As a pastor, Newton made a practice of writing hymns to accompany his sermons as a tool to simplify the truth of the sermon for his working class congregation. He wrote this hymn as a poem, which he originally titled Faith’s Review and Expectations, for his New Year’s Day sermon, January 1, 1773, from 1 Chronicles 17:16-17.

He exhorted his congregation to “Look Back,” noting in the text that the Lord reminded David of what he had been, “I took you from the pasture, from following the sheep” (1 Chron 17:7) to which David responded, “Who am I, O Lord God?” (1 Chron 17:16). His second sermonic move sought to persuade his congregation to “Look Around,” observing that the Lord tells David, “I have been with you wherever you have gone” (1 Chron 17:8) and David responded, “you have brought me thus far” (1 Chron 17:16). Finally, Newton challenged his listeners to “Look Forward,” in light of the “I wills” the Lord promised David (Link). The truths from the sermon were personalized and echoed in light of Christ by Newton in the hymn, which we know as Amazing Grace.

Twenty-three years after John Newton wrote this beloved hymn, on the forty-eight anniversary of his conversion the opening stanza was on his mind, his diary entry on March 21, 1796 (age 70) began, “Oh, it was mercy indeed to save a wretch like me!” (Link). Newton had been a wild and rebellious youth. His actions were so debauched that his coarse language and constant blasphemies would shock hardened sailors. During his time in the Royal Navy of England, Newton deserted and was arrested and publically flogged (Josiah Bull, But Now I See: The Life of John Newton, 18). Newton later became the captain of a slave ship, earning his living from the systematic oppression and enslavement of Africans.

Amazing Grace was first published in a collection of Olney Hymns written by Newton and his friend William Cowper. Jonathan Aitken writes, “This hymnbook became an immediate best-seller,” however, hymn number forty-one, which would later be called Amazing Grace, received no special attention and never caught on in the British Isles (John Newton, 231). The hymn of the former slave trader, set free from his own enslavement to sin by the gospel of Jesus Christ, would not gain renown until it crossed the Atlantic and became a favorite of slaves in the antebellum American South. Aitken explains how WilliamWalker matched the song with a tune circulating the Southern states known as “New Britain.” Further, he notes,

A collection of such Afro-American gospel tunes known as Plantations Songs was one of Walker’s primary sources, and the derivation of the medley for Amazing Grace from this set of tunes is as reasonable a conclusion as any when it comes to tracing its origins (Aitken, John Newton, 234).

The words to Newton’s hymn with an additional verse appear in Harriet Beecher Stowe’s classic anti-slavery novel Uncle Tom’s Cabin, published in 1852. The additional verse contained a line that had been passed down orally in the African-American community antebellum worship tradition:

When we’ve been here ten thousand years,
Bright shining as the sun,
We’ve no less days to sing God’s praise,
Than when we first begun (John Newton, 236)

John Newton spent his life deeply grieved about his participation in the African slave trade. He wrote his first-hand account, Thoughts upon the African Slave Trade, to help his friend William Wilberforce’s political attempts abolish the evil practice. He stated, “I hope it will always be a subject of humiliating reflection to me, that I was once an active instrument in the business at which my heart now shudders” (Steve Turner, Amazing Grace: The Story of America’s Most Beloved Song, 91). The House of Commons passed Wilberforce’s bill on the abolition of the slave trade on February 24, 1807 and Newton died on December 14, 1807.

Newton’s goal in writing hymns to accompany his sermons was simplicity, clarity, and “to drive home the relevance of theology” for his congregation of simple working class people (Turner, Amazing Grace, 72). Newton’s last known words were reported to be “I am a great sinner, but Christ is a great Savior,” he possessed a profound ability to powerfully and passionately simplify Christian truth. The simplicity and pathos of Amazing Grace resonated with slaves in the American South who had been systematically deprived of education.

The new tune and the additional verse only enhanced the hymn’s pathos and power. The American slaves made the song of the former British slave ship captain better. The changes in the hymn furthered served Newton’s original goals in composition.

Amazing gospel grace is the preeminent enemy of racial animosity and hostility. I type these words while attending the ERLC Leadership Summit on The Gospel and Racial Reconciliation. Amazing Grace is still our only hope. The grace of Christ is so amazing that it can turn a slave ship captain into a warrior for the abolition of the practice in his own nation, and then lead him to write a hymn that spiritually strengthens slaves across the ocean after his death, who then adopt the hymn, strengthening the hymn in a way that helps it become entrenched as the nation’s most beloved.

May we keep singing it, and more importantly, may we keep living it. In the Civil Rights era African-American men wore sandwich board signs that said, “I Am a Man,” and often sang Amazing Grace. Recently, I have seen people carrying have signs that say, “Black Lives Matter,” while singing Amazing Grace. The issues are the same in every era. No person is cargo; all are God’s image bearers whose lives matter. And all are slaves of sin, whose only hope is the amazing grace and ultimate freedom in Jesus Christ: “It is for freedom that Christ has set us free” (Gal 5:1). Please join me in praying that the ERLC conference helps equip church leaders and churches fight cultural racial injustice and to vanquish the soft racism too often tolerated and accommodated in our churches.