A Simple Guide to Reading and Applying the Bible with Jesus as the Hero – Queen Esther (Esther 2:1-18) 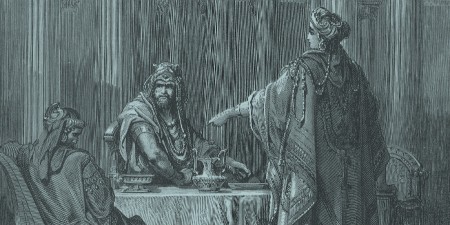 [The following is a guest post by Casey McCall, Pastor of Students and Discipleship at Ashland Avenue Baptist Church]

The book of Esther presents many challenges to the interpreter of Scripture. It’s a book that uniquely never once mentions God. The text presents us with a story that is certainly not G-Rated, and yet the end result is the redemption of God’s people. If we approach the story of Esther as many do and seek to imitate the example of who we perceive to be the good guys, we are going to run ourselves into quite a challenge. We will either have to imitate behavior that is clearly sinful, or we will have to follow many other interpreters of this difficult text and sterilize the story so that no sinful behavior exists.

However, if we approach this text with Jesus as the hero, we are able to correctly interpret what’s really happening in the text without having to promote obvious sin. Christ, as always, provides the correct interpretive key and enables us to make gospel application to our lives.

Who is this text saying is out of order with the purposes of God?

The King of Persia, Ahasuerus, has put his wife, Queen Vashti, away for her refusal to obey the King’s command (1:12). King Ahasuerus next sends word to gather all the beautiful young virgins in the land (2:3) so that each one can spend an evening with him. Each woman had one opportunity to please the King (1:12-14).

At this point in the story, we are introduced to Esther. She is living under the custody of her cousin, Mordecai. We are told that she “had a beautiful figure and was lovely to look at” (2:7). Naturally, Esther is taken in to join the harem of the King (2:8). While there, she charms the King’s assistant and wins special treatment (2:9). Esther is careful, due to the instruction of Mordecai, not to reveal that she is an Israelite (2:10).

In what ways am I prone to be out of order with the purposes of God in a similar manner?

The Jewish people and Esther are in this predicament because of rebellion against the purposes of God. God had patiently warned Israel again and again that if they continued to rebel, he would remove them from the land of promise and place them under foreign powers.

You and I find ourselves in the same predicament. Just as the people of Israel found themselves living under the control of foreign kings because of their sin, we too serve “the prince of the power of the air” (Eph. 2:2) because of our rebellion. We are born in exile, living in the “passions of our flesh, carrying out the desires of the body and the mind.” We are “children of wrath, like the rest of mankind” (Eph. 2:3).

What is this text saying about what must be done, or who we must be, to abide in the purposes of God, and how do I fail to do what it says?

God’s people must be liberated and redeemed, and God’s enemy, the foreign power who is ruling God’s people, must be defeated.

What heroic person or heroic action is walking in line with the gospel in this text, and how does he or she (or the action) remind me of Jesus?

Esther, like Joseph and Moses before her, is being used by God to rescue the Jewish people from annihilation (3:1-15). She has been placed in her position of influence, as Mordecai famously reminds her, “for such a time as this” (4:14). She will later boldly intercede to the King on behalf of her people (8:5-6) in order to save them from Haman’s evil plot to destroy them.

What are the flaws of the heroic person or action in the text that remind me that everyone needs Jesus and that only he can walk perfectly in line with the purposes of God?

There’s really no need to whitewash what’s happening here. Esther’s behavior should not be condoned. She is part of a harem, and when her opportunity comes, she has a sexual encounter with King Ahaseurus. The King is so pleased with Esther that he makes her his Queen (2:17). Esther commits adultery with King Ahasuerus, keeps her Jewish lineage a secret, and marries an unbeliever. The difficulty of her situation does not excuse the sinfulness of her actions as she accommodates the cultural powers for personal gain.

What is the relation of this text to the character and work of Christ?

Figures like Moses, Joseph, and Esther gloriously display God’s providential control over all circumstances. Even when it seems like all hope is lost, God is still working. In fact, the absence of the mention of God in the book of Esther powerfully communicates this very truth. God does not have to be acknowledged to be in control. In each case God places an unlikely hero behind enemy lines only to later provide salvation for God’s people.

The story of Jesus Christ is the story of an unlikely hero who was born into this world in order to cross enemy lines and save his people from their enemy. No one would have looked at Esther as the obvious choice, and no one saw Jesus as the Messianic King. In his hometown of Nazareth, the people asked, “Is not this the carpenter’s son? Is not his mother Mary? Are not his brothers James and Joseph and Simon and Judas?” (Matt. 13:55).

What does Jesus perfectly do or fulfill in this text that we could not do for ourselves?

You and I do not have the power to break the bonds of our enemy and save ourselves from the consequences of our sin. We need someone to defeat our enemy, save us from our deserved destruction, and intercede on our behalf. Jesus meets all of these criteria. Through Jesus’ sacrifice on the cross and resurrection from the dead, God “has delivered us from the domain of darkness and transferred us to the kingdom of his beloved Son, in whom we have redemption, the forgiveness of sins” (Col. 1:13-14).

How does Jesus resolve the redemptive theme of this text?

Jesus is the hero who goes behind enemy lines to win salvation for his people by defeating their enemy.

How does Jesus complete the story of the text?

Esther’s willingness to be used by God “for such a time as this” (4:14) to save the Jewish people from annihilation points to the hero who was sent forth by God to rescue sinners “when the fullness of time had come (Gal. 4:4). It is also clear that Esther needs the grace, forgiveness, and saving mercy of God in Christ.

How will Jesus’ return complete the story of the text?

The day is coming when Jesus’ defeat of his enemies will be fully consummated. He will reign forever and those who oppose the purposes of God and threaten the people of God will be judged finally and forever.

Haman reminds us that the serpent is still active in opposing God. Jesus, however, will one day put an end to the work of the serpent forever: “And the great dragon was thrown down, that ancient serpent, who is called the devil and Satan, the deceiver of the whole world—he was thrown down to the earth, and his angels were thrown down with him” (Rev. 12:9). On that day the ancient promise of Gen. 3:15 will be fulfilled.

How Can I Obey in Christ?—Faith

Why did Jesus have to be crucified and resurrected for this text to bring me joy?

Without the salvation that Jesus won over Satan and sin through his crucifixion and resurrection, we would still be enslaved to sin. “We know that our old self was crucified with him in order that the body of sin might be brought to nothing, so that we would no longer be enslaved to sin” (Rom. 6:6). The dominion of sin and Satan could have never been broken without Christ. All sinners would be hopelessly under God’s just wrath without Christ.

This story would simply be that of a cunning woman who worked a situation to her own benefit if not for the redemptive purposes of God in Christ. Esther was loved because she was beautiful, but Jesus loves us when we are anything but beautiful. We are ungodly sinners and rebels against God. He loves us in spite of our sin and our grotesque rebellion in order to make us beautiful in him—including Esther.

But because of Christ, we are now able to rejoice in the fact that “the God of peace will soon crush Satan under [our] feet” (Rom. 16:20)!

How can I conduct my life in line with the gospel and render the obedience of faith?

I must begin my acknowledging that I am hopeless apart from Christ. I cannot save myself. I cannot defeat those who oppose me. Christ must act on my behalf, and I must rely on what he has done and put my faith completely in his work.

When times look hopeless, I must remember that God is still in control. The fate of the Jewish people in the book of Esther looked doomed, but God was at work the whole time. The crucifixion of Christ certainly looked like the defeat of his claims of being the promised King, but it was really the victory. Likewise, there will be times in my life when I am tempted toward hopeless despair. I must remember the victory that Christ has won. I must remember the promises he has made. I must look to him with hope that he will do all that he has said he will do and bring me safely into his eternal kingdom.

How can I apply my life to the gospel truth of this text?

As I think about my own circumstances, I must remember that no circumstance is to be thought of without reference to God. Even in times when his name is not mentioned, he is providentially working all things for my good in Christ (Rom. 8:28-29). The cross and resurrection of Christ guarantees my ultimate victory. To hopelessly despair is to pretend as if Christ has not acted on my behalf. The story has been written and the hero has won the day. I now get to live my life—come what may—with full confidence that nothing “will separate us from the love of Christ” (Rom. 8:35

Other Posts in this Series:

By Staff|March 24th, 2015|Categories: Blog|Tags: A Simple Guide to Reading and Applying the Bible with Jesus as the Hero, Applying Bible, Bible Reading, Esther|