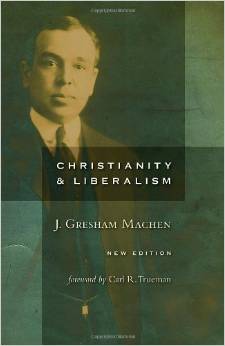 J. Gresham Machen is most well known for his opposition to liberal Protestantism and his trenchant defense of orthodox Christianity. He served as a professor of New Testament at Princeton Seminary for 23 years during the time of the fundamentalist-modernist controversy. In 1929, Machen left Princeton because of encroaching liberalism to form Westminster Theological Seminary. In his classic, Christianity and Liberalism (1923), he argued that liberalism was an altogether different religion than Christianity.

Machen’s critique of liberalism was prescient and continues to be of abiding value 90 years after it was first published. If I could give a copy of Christianity and Liberalism to every pastor in America I would. For those observing the current move of some within in the church to normalize homosexuality in the church, reading Machen’s Christianity and Liberalism brings the realization that the arguments being presented as progressive and cutting edge are actually hauntingly recycled from the failed modernist project. He also show the fallacy and danger of pitting the words of Jesus against the rest of Scripture.

Theological liberalism does not set out to destroy Christianity, but rather to save it by making its message more palatable to modern culture while preserving its real purpose. Make no mistake, with the legal redefinition of marriage upon us, every church in America will be forced to clarify where it stands. Many will capitulate and find that, in an attempt to save Christianity, they lost it. But, perhaps Machen can remind us of what is at stake. The discussion is not between different brands of Christianity—it is a choice of Christianity or liberalism.