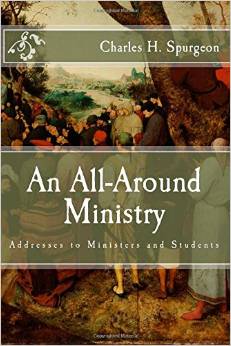 Charles Haddon Spurgeon (1834–1892) was a British Baptist preacher who is still known as the “Prince of Preachers.” In his lifetime, Spurgeon preached to around 10,000,000 people, often up to 10 times a week at different places. His sermons have been translated into many languages. When he died in 1892, London went into mourning. Nearly 60,000 people came to pay homage during the three days his body lay in state at the Metropolitan Tabernacle.

Spurgeon founded The Pastor’s College, which was named Spurgeon’s College after his death. In 1872, he began an Annual Conference for these young preachers at which he customarily delivered a presidential address. The most outstanding of these were reprinted after his death as the book An All-Around Ministry.

These addresses brought the best out of Spurgeon. They are full of bible and sparkle with his quick mind and delightful wit. In this volume it is clear that Spurgeon possessed a pastoral heart par excellence. It is a work to which I return again and again for pastoral wisdom and encouragement. We are giving away a copy Ichthus publications edition that is considerably larger with a more readable typeface than The Banner of Truth edition.

2. Use this widget from Rafflecopter