GIVEAWAY: Commentary on the New Testament Use of the Old Testament 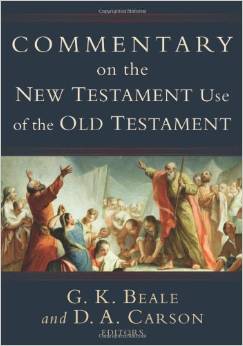 The analogy of Scripture reminds the interpreter that the Word of God is infallibly autointerpreting. “All Scripture is breathed out by God,” and the God who gives his word is also the interpreter of his word (1 Tim 3:16). That Scripture interprets Scripture means that later canonical context provides interpreters with fuller understanding of the meaning of earlier Scriptural passages and that earlier biblical passages refine and clarify our understanding of later texts. We should approach every biblical text like the apostles, unapologetically prejudiced by the canonical revelation of Christ and his kingdom. This book is a fantastic tool to aid Bible readers in becoming saturated with Scripture and understanding the historical progression and organic unity of the Scriptures.

This book is a great resource for those committed to what J.I. Packer referred to as the biblical approach to Scripture, “Its text is word for word God-given; its message is an organic unity, the infallible Word of an infallible God, a web of revealed truth centered upon Christ; it must be interpreted in its natural sense, on the assumption of its inner harmony; and its meaning can be grasped only by those who humbly seek and gladly receive the help of the Holy Spirit” (Fundamentalism and the Word of God, 114).

-I. Howard Marshall (University of Aberdeen) on Acts;

-Moises Silva (author of Philippians in BECNT) on Galatians and Philippians;

-Jeffrey A. D. Weima (Calvin Theological Seminary) on 1 and 2 Thessalonians;