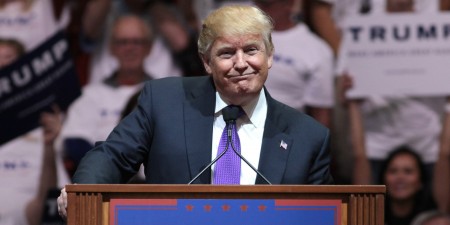 As a pastor I do not tell people who to vote for, but I do not hesitate to point out issues and positions that should disqualify candidates because of their actions and character. I publicly assert that I will never vote for anyone who supports the slaughter of babies in the womb in America’s abortion mills. When Bill Clinton used the Oval Office for an adulterous tryst with a subordinate employee, I did not hesitate to say I thought he was morally and ethically disqualified and should be impeached as President of the United States of America. Now,

I do not hesitate to say that Donald J. Trump is morally disqualified to be President of the United States.

There are many things I could point to as grounds for the fact that I could never vote for Trump, but here I want to focus on one. If this were the only problem I had with Trump, it alone would be enough to disqualify him from receiving my vote for President and serve as reason enough for me to discourage others from voting for him. The problem is Trump’s willingness to appeal to racist rhetoric and demagoguery as a political tactic. I have no idea if Donald Trump is personally a racist or merely a political opportunist, and it does not matter. His willingness to run a dog-whistle racist campaign strategy is utterly despicable. And make no mistake,

Trump is intentionally using racial fear-mongering and is strategically appealing to white nationalists    and others that have sympathy in that direction.

Trump, who answers every question with brash, swaggering, over-the-top bravado, suddenly becomes a man of few words with a faulty memory whenever he is asked about the fact that he has become the presidential candidate of choice among white supremacists. Ironic for a man who has claimed to have the “world’s greatest memory.” Infamously, when Jake Tapper asked Trump about former Ku Klux Klan Grand Wizard and current active white nationalist David Duke’s support of him for President, Trump said he did not know who David Duke was and would have to do some research to know if he could denounce the support. Tapper pressed him three times, and Trump refused to condemn Duke and the KKK three times. Duke has said, “Voting against Donald Trump at this point is really treason to your heritage.” A couple of days earlier, when asked about Duke, Trump knew who he was and, when pressed, gave a quick “I disavow,” and in 2000 Trump referred to Duke as a racist.

What an opportunity for the Trump bravado to shine, “David Duke and the KKK are disgusting! Huuuggggeee looossssers! Liars! Low IQ! Not a fan! Dumb clowns! Zero credibility!” Instead, Trumps says, “Let me do research,” or, “I disavow, Okay,” and tries to move on from the subject. Trump has called for the complete and total shutdown of Muslims entering the country. He told a Jewish audience that he was a negotiator just like them. Trump often says he likes “the blacks,” though he has also said, “Laziness is a black trait.” He also says he likes the Hispanics; after all, thousands of Hispanics work for him. He has also been known to talk about “the Japs” as well. You get the idea:

Donald Trump has never met a racial stereotype he did not like.

Then there are the times Trump has retweeted white supremacists. Below is one example from an account that says it is in Jewamerica and has the Twitter banner “Get the *$%# out of my country”:

"@WhiteGenocideTM: @realDonaldTrump Poor Jeb. I could've sworn I saw him outside Trump Tower the other day! pic.twitter.com/e5uLRubqla"

James Edwards claims to be a Southern Baptist church member of a church in Memphis, Tennessee. A quick look at his show’s statement of principles makes his racist agenda abundantly clear. He writes, “We represent a philosophy that is pro-White and are against political centralization.” He also asserts, “We wish to revive the White birthrate above replacement level fertility and beyond to grow the percentage of Whites in the world relative to other races,” and adds, “America would not be a prosperous land of opportunity if the founding stock were not Europeans. Therefore, we advocate for an America First immigration policy. You can’t have a First World nation with a Third World population.” His slogan is, “Pro-Christian (God), Pro-White (Family), Pro-South (Republic).” Edwards contends, “For blacks in the Americas, slavery is the greatest thing that ever happened to them. Unfortunately, it’s the worst thing that ever happened to white Americans (Source).”

Thankfully, he knows his views are out of step with the Southern Baptist Convention. His website mocks Southern Baptist attempts at racial reconciliation, multi-ethnic churches, and the election of Fred Luter as the first African-American president of the SBC. If he is indeed a member of an SBC church, I plan to call for that church to discipline him or be removed from the SBC. Edwards calls a courageous Southern Baptist leader like R. Albert Mohler, President of The Southern Baptist Theological Seminary, a coward, but his most venomous attacks are aimed at Russell Moore, President of the Ethics and Religious Liberty Commission of the SBC. He accuses Moore of  propagating a view “that looks a damnable lot like the damnable lie that ends in forcing White Christians to choose between their racial identity and their religion, the lie deployed by those who hate Jesus Christ and who hate us.” 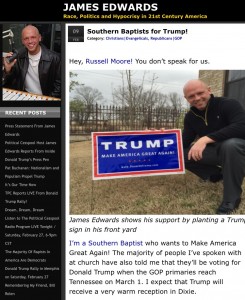 I spent time explaining the outlook of James Edwards because during the flap about Trump’s refusal to denounce David Duke and the KKK and his tepid disavowing that followed, the Trump campaign gave press credentials to white nationalist James Edwards. Donald Trump, Jr. appeared with Edward’s on a white nationalist show called the Liberty Roundtable. According to Edwards,  “a press agency that’s scheduling interviews for Trump Jr.” reached out to him for the interview on behalf of the Trump campaign (source). Trump’s disavowal and the facts do not mix well together. The white nationalist supporters openly say they are fine with Trump making comments against them if that is what it takes for him to get elected; they just want him to win because they know that he is their best option to further their agenda.

A genuinely Christian attitude toward racial and ethnic diversity is not one of toleration, but celebration.    The human race was made in the image of God (Gen. 1:27, Acts 17:26). The entire human race shares a common descent as the fallen children of Adam (Gen. 3:17, 1 Cor. 15:22). The church of the Lord Jesus Christ is made up of redeemed image bearers described as “one new man” (Eph. 2:15), a people whose identity is found in being united by faith to Christ (Eph. 2:11-22). The glory of the triumphant kingdom of Christ is demonstrated by the multi-ethnic diversity of worshippers who exult, “Worthy are you to take the scroll and to open its seals, for you were slain, and by your blood you ransomed people for God from every tribe and language and people and nation” (Rev. 5:9).
The inclusion of ethnically diverse peoples in the household of God is God’s intention,    fulfilling his gospel promise (Gen. 3:15, Gen. 12, 15, Ps. 67, Acts 2, Rom. 4, Gal. 3, 4, Eph. 2, 4, Rev. 5, 7, 14). Culturally derived worldviews which root identity in race and ethnicity are directly at odds with the gospel of Jesus Christ and must be subordinated by those who truly say, “Jesus is Lord.” A vital way that local churches reflect the glory of his kingdom is through being intentionally multi-ethnic outposts of the kingdom who celebrate diversity in Christ, including diversity of skin color. Where racism is embraced, or racist hatred is tolerated, the mind of Christ on display in the incarnation and subsequent crucifixion is rejected.
As a Christian and a pastor, I say without equivocation that I will never vote for Donald Trump    on the basis of his willingness to use racist rhetoric and tolerate racist ideology, and I do not think you should either. Trump’s lack of character on the issue of race should disqualify him from the office for anyone who takes the teachings of Jesus seriously.
I will do all within my power to make sure the entire country is not enrolled in Trump University.    The Bible says that the New Heavens and New Earth will be an eternal display of the multi-ethnic grace of God, and it also has a name for the place where people just want to cling to self and be with their own kind; the Bible calls that place Hell.