Preach for Holiness by Preaching the Gospel: The Example of David Brainerd 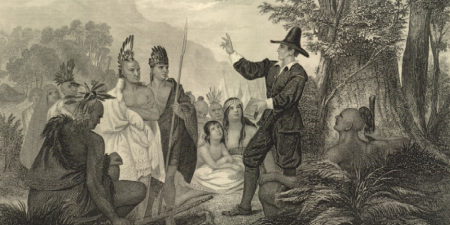 David Brainerd was a missionary to the American Indians in New York, New Jersey, and eastern Pennsylvania. Born in Connecticut in 1718, he died of tuberculosis at the age of twenty-nine in the home of his friend Jonathan Edwards. Edwards preached the funeral sermon for Brainerd and published his diary. Brainerd would have a hard time being accepted by any missionary board today. His health was poor and he was expelled from Yale in 1742 for accusing some faculty member of being carnal and unconverted, which meant that he could not serve as a pastor in the region. Brainerd was devastated and felt cut off from pursuing his calling until he began serving as a missionary to the American indians in 1743.

Christ is the Center and Goal of Every Sermon

Brainerd’s primary method in his mission work was Christ-centered preaching. He explained his approach to preaching in his journal: “I cannot but take notice, that I have, in the general, ever since my first coming among these Indians in New Jersey, been favoured with that assistance, which to me is uncommon, in preaching Christ crucified, and making him the centre and mark to which all my discourses among them were directed.” According to Brainerd, Christ was the energizing center of every sermon but he is also the mark, or the goal of every sermon. His preaching was both Christocentric and Christotelic. He explains his homiletical method as focusing on “the being and perfections of God,” man’s “deplorable state by nature as fallen creatures,” “The utter insufficiency of any external reformations,” to open [Jesus’s] all-sufficiency and willingness to save the chief of sinners,” and “thereupon to press them without delay.”

Christ is the Substance of Every Biblical Subject

Brainerd explained that no matter the biblical subject, “I have been naturally and easily led to Christ as the substance of every subject.” He elaborates regarding his relentless Christ-focus in preaching,

If I treated on the being and glorious perfections of God, I was thence naturally led to discourse of Christ as the only “way to the Father.”—If I attempted to open the deplorable misery of our fallen state, it was natural from thence to show the necessity of Christ to undertake for us, to atone for our sins, and to redeem us from the power of them. If I taught the commands of God, and showed our violation of them, this brought me in the most easy and natural way, to speak of and recommend the Lord Jesus Christ, as one who had “magnified the law” we had broken, and who was “become the end of it for righteousness, to everyone that believes.” And never did I find so much freedom and assistance in making all the various lines of my discourses meet together, and centre in Christ, as I have frequently done among these Indians.

I have been drawn in a way not only easy and natural, proper and pertinent, but almost unavoidable, to discourse of him, either in regard of his undertaking, incarnation, satisfaction, admirable fitness for the work of man’s redemption, or the infinite need that sinners stand in of an interest in him; which has opened the way for a continual strain of gospel-invitation to perishing souls, to come empty and naked, weary and heavy laden, and cast themselves upon them.

Brainerd was convinced that the Spirit had enabled him to preach Christ in plain speech, “with such freedom, pertinency, pathos, and application to the conscience, as, I am sure, I never could have made myself master of by the most assiduous application of mind.” He notes that formerly he read Acts 10, the apostle’s discourse to Cornelius, and  “wondered to see him so quickly introduce the Lord Jesus Christ into his sermon, and so entirely dwell upon him through the whole of it, observing him in this point very widely to differ from many of our modern preachers: but latterly this has not seemed strange, since Christ has appeared to be the substance of the gospel, and the centre in which the several lines of divine revelation meet.”

Brainerd preached with the conviction that “morality, sobriety, and external duties” are best “promoted by preaching Christ crucified.” He believed that the external duties of Christianity flow from the internal power of genuinely embracing divine grace in Christ. The proper relationship between the gospel indicative and imperative is not to pit one against the other. Rather, it is to understand that their relationship is irreversible. The imperative rests on the foundational gospel indicative and is consequential. Brainerd explains,

And God was pleased to give these divine truths such a powerful influence upon the minds of these people, and so to bless them for the effectual awakening of numbers of them, that their lives were quickly reformed, without my insisting upon the precepts of morality, and spending time in repeated harangues upon external duties.

When these truths were felt at heart, there was now no vice unreformed,—no external duty neglected. … The reformation was general; and all springing from the internal influence of divine truths upon their hearts; and not from any external restraints, or because they had heard these vices particularly exposed, and repeatedly spoken against.

Brainerd believed that according to Christ and his apostles, “smooth and plausible harangues upon moral virtues and external duties, at best are like to do no more than lop off the branches of corruption, while the root of all vice remains still untouched” and the only way to get to the root of the sin problem was by the gospel of sovereign grace in Christ. Brainerd also contended that when the root of sin was severed by a focus on the gospel people naturally moved toward positive spiritual disciplines such as corporate worship and prayer. He explained that it was “not because I had driven them to the performance of these duties by a frequent inculcating of them, but because they had felt the power of God’s word upon their hearts,—were made sensible of their sin and misery, and thence could not but pray, and comply with every thing they knew was duty, from what they felt within themselves.”

Brainerd clarifies that he does not oppose the preaching of morality, but only insists that morality must be preached as a consequence of faith in the gospel, and not abstracted from the gospel. He summarizes his thoughts about his preaching: “That the reformation, the sobriety, and external compliance with the rules and duties of Christianity, appearing among my people, are not the effect of any mere doctrinal instruction, or merely rational view of the beauty of morality, but from the internal power and influence that divine truths (the soul-humbling doctrines of grace) have had upon their hearts.” All who preach, would do well to follow the approach to preaching taught by Jesus, modeled by his apostles, and faithfully applied by Brainerd in his mission work among the American Indians.