GIVEAWAY: The King in His Beauty 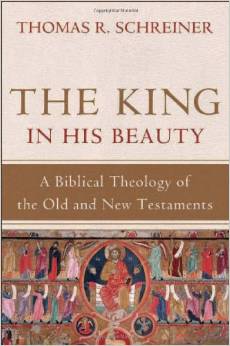 As a pastor and seminary professor I find myself pulling Tom Schreiner’s The King in His Beauty: A Biblical Theology of the Old and New Testaments off of the shelf to reference multiple times each week. I do not know of any greater commendation I could offer a book than that. It is written in an accessible style but is theologically rich. One thing that makes it so useful to preachers and biblical teachers is its book-by-book canonical arrangement and the fact it is a whole-Bible biblical theology with a coherent biblical-theological vision. Schreiner’s attentiveness to the storyline of Scripture in light of a biblical book’s historical and canonical setting in redemptive history yields rich and lucid insights.

Below are excerpts of Schreiner discussing the book in a Towers interview with Josh Hayes.

I’m not trying to advance a new or novel scholarly theory really. I am trying to discover how the Scriptures fit together.

I took the title of the book from Isaiah 33:17, where he says, “You will see the king in his beauty.” The story of the Bible is that God, as Lord and creator, is king, and he created us to rule the world for him. Human beings rejected God’s rule and sinned. God is king, but he doesn’t treat human beings as he did fallen angels. He promises in Genesis 3:15 that victory will be won (the world will be reclaimed) through the offspring of the woman who crushes the serpent.

So that’s the narrative: how will God reclaim his rule over the world through human beings? Scripture’s storyline reveals that God’s kingdom will not come through the work of human beings. Victory is God’s work, and thus he deserves all the glory and honor and praise. The story of the Flood indicates the natural bent of human beings: we rebel against God and build our own kingdom. But God promises to preserve the world until he brings in full redemption, and he promises to reclaim the world through one man, and that man is Abraham and his offspring. It’s one man against the world.

One of the interesting features in the OT account is the enormous amount of time it takes for the promises to be fulfilled, showing the coming of God’s kingdom is a miracle, that it’s contrary to human beings because we are rebellious against God. The coming of the kingdom is narrowed down, in the Davidic covenant, to one offspring of Abraham and to the offspring of David. In the New Testament, that one offspring is clearly revealed to be Jesus Christ.

So, the seed of the woman in Genesis 3:15 is Jesus Christ. Another way of putting it is this: fundamentally, the church throughout its history has read the storyline rightly. That storyline, however we explain it, has been understood from the earliest times, from the earliest church fathers, because God made it clear. We have to be reminded in each generation what that storyline is. There’s a depth here for the most profound intellect, and there are areas of disagreement among scholars. At the same time, the basic story is accessible for the ordinary person.

This giveaway has closed!